Sri Lanka has opened a Commonwealth summit amid criticism over its human-rights record and alleged war crimes committed against the country’s ethnic Tamil minority during a 27-year civil war that ended in 2009.

Sri Lankan President Mahinda Rajapakse said on Friday the Commonwealth must not be a “judgmental body” as he continued to defend his government against the allegations.

“If the Commonwealth is to remain relevant to its member countries, the association must respond to the needs of its people and not turn into a punitive or judgmental body,” Rajapakse said in a speech before the formal opening of the summit by Britain’s Prince Charles.

The Commonwealth has been criticised for holding its biennial summit on the Indian Ocean island despite its questionable human rights record.

Three world leaders have boycotted the meetings over Sri Lanka’s continued refusal to allow independent investigations into the alleged crimes.

At least 100,000 people lost their lives in Sri Lanka’s ethnic conflict between government forces and Tamil fighters. There are allegations that up to 40,000 Tamil civilians were killed in the final weeks of the war in 2009.

The Commonwealth of mostly former British colonies, comprising 53 countries, has little power, but wields some influence in mediating disputes between members.

The agenda for the three-day Commonwealth Heads of Government Meeting (CHOGM) includes sessions on debt restructuring and climate change.

The government of Sri Lanka “wants to show that Sri Lanka is open for business, that this is a place that Commonwealth countries and indeed countries around the world can invest,” Al Jazeera’s Imtiaz Tyab reported from Colombo.

During a press conference on the summit’s eve, Rajapakse said his administration deserved credit for managing to bring an end to the conflict. Rajapakse, 67, has controlled the Buddhist Sinhalese-majority nation since 2005.

“People were getting killed for 30 years, at least after 2009 we have stopped it,” he said.

“There is no killing in Sri Lanka today.”

The northern Jaffna peninsula, home to around 800,000 Tamils, was the main battlefield in the decades-long conflict.

Before the war, Jaffna had a flourishing economy that was second only to Colombo in terms of wealth.

But its towns and villages are now littered with shelled-out buildings, farmland is abandoned and some 30,000 people still live in refugee camps.

Stephen Harper, Canadian prime minister, was the first to boycott the summit after his government said attending was akin to “accommodating evil”.

Navin Chandra Ramgoolam, Mauritian prime minister, who is set to host the next summit, also refused to attend.

Manmohan Singh, Indian prime minister, is not attending, seemingly to avoid offending Tamil voters in the run-up to next year’s elections. His foreign minister is taking part instead.

British Prime Minister David Cameron has been criticised for not boycotting the conference, but he promised Aung San Suu Kyi, the Burmese Nobel laureate, this month that he would see the situation in Jaffna fate first hand.

He will become the first foreign leader to visit Jaffna since the former British colony gained independence in 1948 as he is expected to meet with survivors of the conflict there Friday afternoon.

Hundreds of ethnic Tamils protested in Jaffna before Cameron’s arrival, demanding answers about the thousands who went missing near the war’s end in 2009. Protests have been banned in Colombo during the conference.

Cameron has said he would have some “tough conversations” with Rajapakse upon his return to the summit.

Speaking during a stopover in India, Cameron reiterated his calls for an international investigation into war crimes allegations, which has also been a demand of several UN bodies.

At the last summit in 2011 in Australia, Commonwealth leaders drew up a charter of common values which committed members to respecting human rights.

But Human Rights Watch said the Commonwealth “risks its credibility … if it doesn’t publicly press Sri Lanka on its rights record and the lack of accountability for wartime atrocities”.

Kamalesh Sharma, Commonwealth secretary-general, denied the organisation had turned a deaf ear to the allegations against the hosts and insisted it had made progress by engaging with Rajapakse’s regime.

“It is not making a mockery. It is showing the Commonwealth in action,” he said. 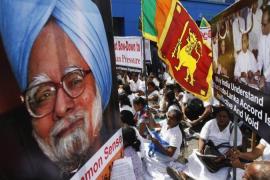 Doubts voiced over India-Sri Lanka ties as Manmohan Singh decides to stay away from Commonwealth summit in Colombo. 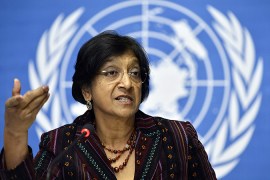