The expected death toll from Typhoon Haiyan’s rampage through the Philippines is much lower than the 10,000 previously estimated, President Benigno Aquino has said, as attention shifts to a quickly deteriorating security situation.

Aquino said an initial UN estimate of 10,000 people killed in in the city of Tacloban was “too much”, five days after one of the strongest tropical storms on record destroyed tens of thousands of houses.

The latest official government death toll stands at 2,275, although authorities say they have not come close to accurately assessing the number of bodies lying amid the rubble or swept out to sea.

International aid groups say they fear what is known now is just the tip of the iceberg.

“Obviously the situation in Tacloban is appalling but we are also very concerned about outlying islands,” Patrick Fuller, Red Cross spokesman in the Asia-Pacific, told the AFP news agency.

Authorities struggled to keep a grip on security as relief operations were only starting to pick up pace, with two more airports in the region reopening, allowing for more aid flights.

But minimal food and water was reaching people in Tacloban and outlying regions due to a lack of lorries and blocked roads.

Desperation has begun to grip the country as looting turned deadly on Wednesday and survivors panicked over delays in supplies of food, water and medicine, some digging up underground water pipes and smashing them open.

In one incident, eight people were crushed to death as thousands of typhoon survivors stormed a rice warehouse to gain access to the rice bags, near Tacloban, Rex Estoperez, spokesman for the National Food Authority, the government’s rice trading agency, said on Wednesday.

“The looting is not criminality. It is self-preservation,” Tecson John Lim, Tacloban city administrator, said.

Al Jazeera’s Marga Ortigas, reporting from Cebu, an island also hit hard by Haiyan, said the government was worried now about looting of homes and malls by people so desperate to find something to eat of some shelter.

Since the storm, people have broken into homes, malls and garages, where they have stripped the shelves of food, water and other goods.

Authorities have struggled to stop the looting. There have been unconfirmed reports of armed gangs involved in some instances.

Our correspondent said the government was concerned about communist rebels who have been operating in and around the disaster-hit areas staging attacks in relief workers and relief envoys.

“The government said that they are trying to deploy military aid as fast as the can to gain control of the situation,” she said. 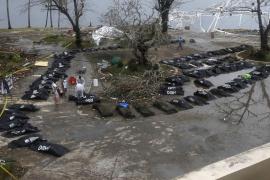 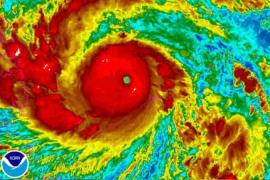 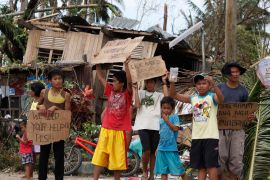 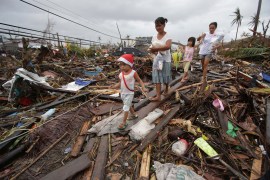