As many as 300 people are feared dead after  a cyclone and heavy floods in Somalia’s semi-autonomous Puntland  region, according to the local government.

Puntland’s government has described the situation as a “disaster”, with  entire villages destroyed, and said it was appealing for emergency  international aid.

“Torrential rains, high wind speeds and flooding has created a state of  emergency, with 300 persons feared dead, hundreds others unaccounted for, and  countless livestock lost,” the government said in  a statement.

Many fishermen “are missing and feared dead, the storm has destroyed entire  villages, homes, buildings, and boats”, the statement said.

The death toll could not be independently verified, but weather experts  from the UN Food and Agriculture Organisation (FAO) confirmed flooding was  severe.

“Given that Puntland is a semi-arid region, it rarely rains but when it  does, to an extent we have seen… the impact is devastating,” Hussein  Gadain, a senior FAO technical adviser, told the AFP news agency.

Pirate hotspots such as the port of Eyl – from where Somali  armed men have launched attacks far out into the Indian Ocean – are some of the  worst affected.

Coastal destruction caused by a 2004 tsunami was widely seen as being one  trigger for a surge in attacks off Somalia, peaking in January 2011 when the pirates held 736 hostages and 32 boats.

However, the rate of attacks has fallen in the past two years, prompted partly by the posting of armed guards on boats and navy patrols.

Pirates still hold an Omani-flagged fishing boat offshore, as well  as at least six traditional wooden Yemeni fishing boats, and around 90  sailors from other boats are still held hostage onshore.

The UN World Food Programme said it was “working closely” with local authorities “to assess the needs in Puntland in the aftermath of the cyclone.”

The main tarmac road between Puntland’s capital Garowe and the key port  Bossaso has been cut off by flood waters, hampering delivering of relief  supplies.

“The loaded and ready trucks cannot deliver supplies by road, as the heavy  rains and flooding have rendered dirt roads to the coastal areas impassible,”  the government said.

Somalia has been riven by civil war since the collapse of a central  government in 1991.

Puntland, which forms the northeastern tip of the Horn of Africa, has its  own government, although unlike neighbouring Somaliland, it has not declared  independence from Somalia. 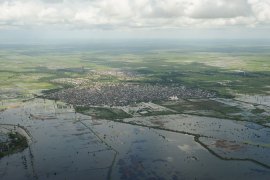 Flooding from a tropical cyclone has forced thousands of Somalis to leave their homes. 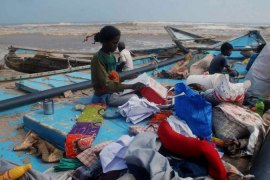 A report suggests that the failure to address natural disasters could undermine attempts to end global poverty. 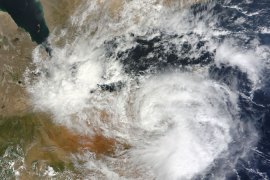 A rare storm sweeps in from Arabian Sea, killing at least 100 people. 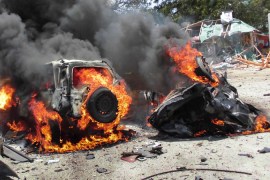 International donors meet in Bruseels to approve a “New Deal” for Somalia to drive its economic and political recovery.