US Secretary of State John Kerry has said that world powers had moved closer towards a deal with Iran over its nuclear programme, but said that the US continued to be sceptical of the country willingness to act.

“There is no question in my mind that we are closer now as we leave Geneva than we were when we came, and that with good work and good faith over the course of the next weeks we can in fact secure our goal,” he told reporters in Geneva.

“We came to Geneva determined to make certain that Iran does not acquire a nuclear weapon. That remains our goal.”

The US and its allies narrowed their differences with Tehran after three days of intense diplomatic efforts but failed to produce a breakthrough in the decade-long dispute, as France believed the proposal did not adequately neutralise the risk of Iran making an atom bomb.

as we leave Geneva”]

Kerry said he was not discouraged to be leaving Geneva without an agreement, insisting negotiators had “made significant progress”.

His comments came after EU diplomatic chief Catherine Ashton announced that Iran and six world powers – the United States, France, Germany, Russia, China and Britain, also called as P5+1 – had not been able to finalise a deal and that negotiations would resume on November 20.

Yukiya Amano, the chief of the International Atomic Energy Agency (IAEA), will be holding talks with Iranian officials in Tehran on Monday, in connection with the push for a deal.

The US secretary of state said that the US continued to be sceptical of Iran’s willingness to dismantle its nuclear programme and would keep sanctions in place as talks continue.

“We are not blind, and I don’t think we’re stupid. I think we have a pretty strong sense of how to measure whether or not we are acting in the interests of our country and of the globe,” Kerry said on NBC’s “Meet the Press.”

“It takes time to build confidence between countries who have been really at odds for a long time,” he said, pointing to the distrust that has reigned between Washington and Tehran since the 1979 Iranian revolution.

Kerry left Geneva for the United Arab Emirates, where both Iran and Syria will be on his agenda for talks with the Gulf country.

Meanwhile, back in the United States, lawmakers say they are considering passing new sanctions against the Iranian government.

In Tehran, Iranian President Hassan Rouhani said his country will not give up the right to enriching uranium, in his first comments since talks broke down.

The newly elected president said on Sunday that his nation had acted rationally and tactfully during three days of nuclear negotiations in Geneva.

“We have said to the negotiating sides that we will not answer to any threat, sanction, humiliation or discrimination. The Islamic Republic has not and will not bow its head to threats from any authority,” he told the National Assembly, reported by the ISNA news agency.

Both the United States and Israel have refused to rule out possible military action against Iran if diplomacy fails to resolve the decade-old nuclear dispute.

Israeli Prime Minister Benjamin Netanyahu said on Sunday that easing sanctions on Iran would be “like putting a hole in your tire”. Netanyahu kept up recent criticisms, calling the talks “a very bad deal” for everyone except Iran.

“Iran gives practically nothing and it gets a hell of a lot,” Netanyahu told CBS television’s “Face the Nation” programme.

Iran rejects Western accusations that it is seeking the capability to develop nuclear weapons. 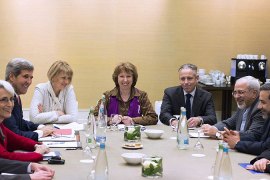 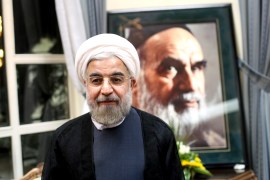 Rouhani: Iran will not give up nuclear rights

President says nation will not bow to threats after France scuppers nuclear programme deal it describes as a “con”.