Syria has destroyed all of its declared chemical weapons production and mixing facilities, meeting a major deadline in an ambitious disarmament programme, the international chemical weapons watchdog said in a document seen by Reuters news agency.

The Organisation for the Prohibition of Chemical Weapons (OPCW) said in the document its teams had inspected 21 out of 23 chemical weapons sites across the country.

The other two were too dangerous to inspect, but the chemical equipment had already been moved to other sites which experts had visited, it said.

“The OPCW is satisfied it has verified, and seen destroyed, all declared critical production, mixing, filling equipment from all 23 sites,” the document said.

Al Jazeera’s Omar Al Saleh, reporting from Istanbul, said “by November 1, Syria will no longer have the capacity to make new chemical weapons, bringing an end to phase one and phase two”.

“Phase three will last to June 2014 and will involve United Nations mission support to monitor all destruction of 1,000 tonnes of chemical weapons. The UN/OPCW has no mandate to destroy them so a UN member state will have to provide technical and operational support.

“But also, we have to be a bit suspicious about the second phase as this is what Syria has declared, and see that other states will agree with Syria on the amount it said it has. Other countries may have their own intelligence,” our correspondent said.

Under a Russian-American arranged deal, Damascus agreed to destroy all its chemical weapons after Washington threatened to use force in response to the killing of hundreds of people in a sarin attack on the outskirts of Damascus on August 21.

The United States and its allies blamed Assad’s forces for the attack and several earlier incidents. The Syrian President Bashar al-Assad has rejected the charge, blaming rebel brigades.

Under the disarmament timetable, Syria was due to render unusable all production and chemical weapons filling facilities by November 1 – a target it has now met.

By mid-2014 it must have destroyed its entire stockpile of chemical weapons. 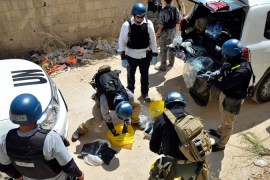 Ban Ki-moon proposes formation of 100-strong mission, based in Cyprus, to oversee destruction of weapons by mid-2014. 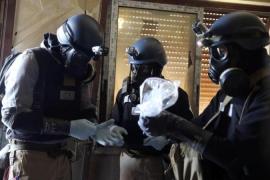