Al Jazeera has uncovered evidence that armed forces in the Central African Republic were responsible for a massacre that took place on October 26, a few kilometres from the centre of the town of Bouar.

Landlocked CAR – a nation of 4.6 million people – has slipped into chaos since a coalition of fighters named Seleka took control of the capital, Bangui, and deposed President Francois Bozize in March this year.

Human rights organisations estimate that thousands of people have been killed amid the deterioraring security situation.

Michel Djotodia, the Seleka leader, has declared himself president of CAR.

He announced on September 14 that the Seleka alliance had been dissolved after it was blamed for a wave of violence. However, attacks have continued throughout the country.

In an exclusive interview with Al Jazeera’s Nazanine Moshiri in Bangui, Djotodia has admitted that Seleka fighters do not follow his orders.

“When we arrived in Bangui, all the jobless, big-time bandits and escapees from prison … dressed in uniform and said they were Seleka,” he said.

“It is difficult for me because I don’t know who they are. It is hard for me to control them.”

Last week, senior UN officials told the UN Security Council that the CAR is at risk of slipping into genocide as armed groups incite Christians and Muslims against each other in the virtually lawless country.

The country is rich in gold, diamonds and uranium, but decades of instability and the spillover from conflicts in its larger neighbours have left it mired in cycles of crises.

The African Union plans to deploy a 3,600-member peacekeeping mission, known as MISCA, in the country.

It would incorporate a regional force of 1,100 soldiers already on the ground and is unlikely to be operational before 2014. 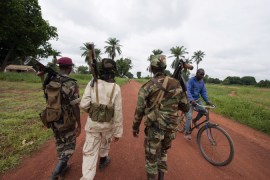 CAR: ‘A state of lawlessness’

The UN has adopted a resolution to bring peace to the Central African Republic, but will it make a difference? 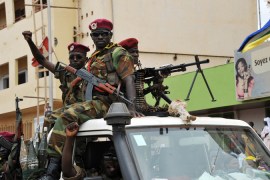 Is CAR on the brink of collapse?

A wave of violence is sweeping the Central African Republic five months after rebels seized power in a coup. 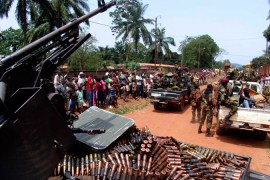 Who is in charge now that the armed rebels have overthrown the government and what is being done to protect the people?