Greek riot police stormed the building of former state television ERT and evicteddozens of protesters occupying it since June when the government abruptly shut the broadcaster, police officials said.

Scuffles broke out between some protesters and riot police, who had cordoned off the area and blocked the entrance to the building.

ERT’s closure, aimed at meeting a target for job cuts set by foreign lenders, triggered a government crisis and forced sacked journalists to turn to the Internet to broadcast news illegally.

They showed footage on Thursday of an empty newsroom.

“The government has reached such a point of delirium that it is staging a coup against itself,” said Zoe Konstantopoulou, a senior politician from the leftist opposition Syriza party, who rushed to the building with other party members.

“Some people will be held accountable before history and future generations,” she said.

Government spokesman Simos Kedikoglou said the early morning police operation was carried out to “apply the law and restore legality”.

“(The building) was under illegal occupation,” he said in a statement.

Police fired a few rounds of teargas to disperse small groups of protesters.

About 300 ERT supporters rallied outside the broadcaster’s main building, in the northern suburb of Agia Paraskevi.

Inside, police checked in the presence of a prosecutor whether facilities and equipment had been damaged since the broadcaster’s closure.

The government’s sudden decision to switch off the signal of ERT TV in June and fire its 2,600 employees to please international lenders shocked many in Greece and cost Prime Minister Antonis Samaras a coalition partner.

Hundreds of those who found themselves without jobs had defied government and management orders to leave the building.

Since then, they have been broadcasting a bootleg news channel over the Internet, while the government launched a new television channel called Public TV or DT.

“The battle for democracy and social justice which ERT workers have been fighting for more than four months, has reached its most crucial moment,” read a message on ERT’s Facebook page calling for people to protest in solidarity. 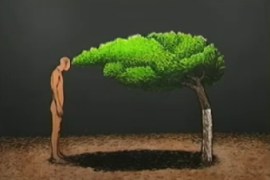 Financial crisis is having a crippling impact on the heritage of the culture rich country. 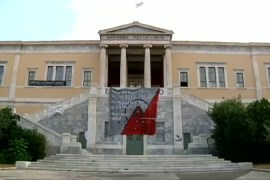