Egypt’s deposed president, Mohamed Morsi, has been brought from the secret location of his four-month detention to face trial on charges of incitement of violence and murder.

Moris’s appearance on Monday at a police academy in an eastern Cairo district was his first public appearance since his military-orchestrated overthrow on July 3.

Since his toppling, Morsi has been held at a secret military location. He was flown on Monday to the venue of his trial by helicopter.

Morsi will face charges along with 14 other Brotherhood figures and allies – including Mohamed el-Beltagy and Essam el-Erian – in connection to clashes last December outside his presidential palace that left at least 10 dead.

His co-defendants were taken to the venue from their jail in a suburb south of Cairo in armoured police cars.

The trial is fraught with risks and comes amid a highly charged atmosphere in a bitterly polarised nation, with a deepening rift between Morsi’s Islamist supporters in one hand and Egypt’s security establishment and the nation’s moderate Muslims, secularists, Christians and women on the other.

Since his overthrow, Morsi has been held at a secret military location with little communication to the outside world.

He is likely to represent himself in the trial, Brotherhood lawyers have said.

Brotherhood supporters have called the detention an outright kidnapping, and Morsi has refused to cooperate with his interrogators.

Unlike Mubarak’s trial, the proceedings against Morsi are not likely to be aired live and Morsi will probably be taken back to the place he has been held instead of being transferred to a normal prison after the first session, for fear his supporters would turn the prison into a “focal point of endless protests”.

Churches have been torched, and in an attack in Cairo last month, five Copts and one Muslim were killed in drive-by shooting at a church. 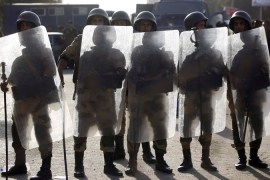 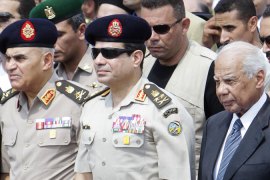