US Secretary of State John Kerry said his country is committed to working with Egypt’s interim rulers, on his first visit to Cairo since the military ousted President Mohamed Morsi.

“We are committed to work and we will continue our cooperation with the interim government,” Kerry told reporters in a joint news conference on Sunday, calling for “inclusive, free and fair elections.”

Kerry said he wanted to express to the Egyptian people “as clearly and as forcefully as I can in no uncertain terms, that the United States is a friend  of the people of Egypt, of the country of Egypt, and we are a partner.”

Egypt’s Foreign Minister Nabil Fahmy, who met Kerry earlier in the day, was present at the news conference and said: “I mentioned before that US-Egypt relations is going through turbulent time. Kerry’s comments today show positive signs.”

Apart from Kerry’s meeting with Fahmy, he was also expected to see Egypt’s Army chief, General Abdel Fattah el-Sisi as well as the interim president, Adly Mansour, and civic leaders.

Kerry also played down Washington’s suspension just weeks ago of part of its $1.5bn in annual aid to Cairo. “US-Egyptian relations should not be defined by assistance,” Kerry said.

The United States said on October 9 it would withhold deliveries of tanks, fighter aircraft, helicopters and missiles, as well as $260m in cash aid to Egypt, pending progress on democracy and human rights.

Kerry, who embarks on a Middle East tour lasting up to November 11, said this week he would visit Cairo to meet a “cross-section of civil society”.

Kerry last was in Egypt in March, when he urged Morsi and his Muslim Brotherhood-backed government to enact sweeping economic reforms and stressed the importance of political inclusiveness. Those calls went unheeded.

Simmering public unhappiness with the president’s rule boiled over when the powerful Egyptian military deposed Morsi in July 3 and established an interim government.

Washington has repeatedly urged the army-backed interim authorities to govern in a more inclusive manner, including the accommodation of the Muslim Brotherhood and restoring democratic rule.

It has instead taken harsher measures against Egypt’s oldest Islamist movement. Hundreds of its backers have been killed and the Brotherhood’s leaders are behind bars, leading to fears that some members of the group will take up arms against the state.

Several hundred people protested in a few Egyptian cities on Friday, responding to a call from a pro-Morsi alliance for daily protests until the ousted president’s trial begins on Monday.

Charges relate to the deaths of about a dozen people in clashes outside the presidential palace in December after Morsi enraged his opponents with a decree expanding his powers.

Fighting also erupted in the Gisr al-Suez district of Cairo.

The Brotherhood and its allies have urged crowds to gather on Monday outside a police institute near Cairo’s notorious Tora prison, where Morsi’s trial is expected to take place.

Morsi has been held in a secret location since July. In that time fighters have staged almost daily attacks against security forces in the Sinai Peninsula and some fear an Islamist insurgency could spread to other parts of Egypt. 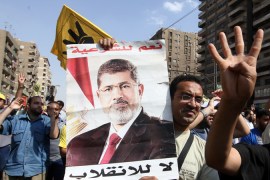 Protests in Egypt ahead of Morsi trial 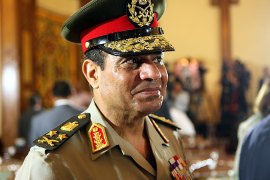 Abdel Fattah el-Sisi says in a leaked audio tape that the army should have immunity under new constitution. 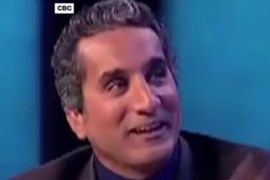 Private channel says Bassem Youssef had not been following editorial policy, but did not give any more details.