Thousands took to the streets on Friday to protest against the draft bill, raising fears of possible violence.

The House of Representatives voted 310-0 early on Friday to pass a draft of the amnesty bill after 19 hours of heated debate during which lawmakers opposed to it walked out. The legislation must be approved by the Senate before it becomes law.

Critics argue the bill would whitewash crimes of Thaksin, who lives in self-imposed exile in Dubai to avoid prison for a corruption conviction.

Others are opposed because it would grant amnesty to those responsible for the killing of around 90 protesters during a wave of anti-government rallies that brought the heart of Bangkok to a standstill in 2010.

Thaksin remains highly polarising seven years after being ousted by a military coup over allegations of corruption and disrespect for Thailand’s revered King Bhumibol Adulyadej.

The ruling Puea Thai Party of Prime Minister Yingluck Shinawatra – Thaksin’s sister – had ordered all its lawmakers to support the amnesty bill, which would cover crimes related to political unrest since 2004.

Anticipating possible unrest as lawmakers readied to debate the bill, Thailand’s interior minister earlier this week ordered provincial governors to be on alert for violent protests or disruptions to public utilities.

Before dawn on Friday, more than 5,000 opposition Democrat Party supporters opposed to the amnesty plan rallied outside their headquarters. The party’s lawmakers said they would file a complaint to the Constitutional Court to block the legislation.

Human rights groups have said a blanket amnesty would allow officials and protest leaders to go unpunished for alleged abuses. 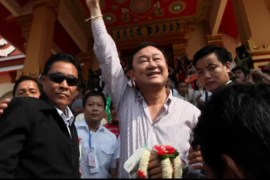 Thaksin says he plans to return to Thailand 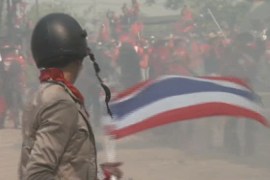 Law proposes amnesty to protesters convicted in connection with 2006 coup and 2011 political rallies.