France was shocked after the discovery of an underfed and dehydrated baby girl who had been forced to live hidden in a car boot, possibly since birth.

The little girl, aged 15 to 23 months, was found by mechanics on Friday when her mother took the car to a garage in Terrasson, in central France.

Police on Monday said one of the mechanics heard “bizarre noises, like moans” coming from the car boot and opened it to discover the girl, who was naked, lying in her own excrement, dehydrated and feverish.

The girl was taken to hospital where doctors said she was suffering from delayed growth and mental problems.

The girl “was hidden, it seems since birth, and more seriously, she is suffering from significant [developmental] delays,” local prosecutor Jean-Pierre Laffite told AFP.

The situation “defies belief”, he said.

The girl’s mother, 45, and her 40-year-old partner were arrested and charged on Sunday with child abuse and endangering a minor. They face up to 10 years in prison.

The mother told police that she had given birth in secret and hidden the baby’s existence from everyone, including her partner, the girl’s father.

The couple have three other children, a four-year-old girl and two boys aged nine and 10, who were handed over to social services following their parents’ arrest.

The mechanic who found the girl, Guillaume Iguacel, told AFP on Monday that he was still reeling from the discovery.

“I’m still having trouble sleeping, it was a horrifying sight, seeing this little girl in her own excrement, not able to hold up her head, white as a sheet,” he said.

Iguacel said the girl’s mother appeared to have little concern for her daughter.

“We were deeply shocked because she didn’t find this abnormal. We told her to remove the little girl (from the boot) and give her something to drink right away,” he said.

The couple, who were both of Portuguese origin and both unemployed, lived in the village of Brignac, about 10km from the garage where the baby was found.

Neighbours told French media the mother had been behaving strangely and was seen spending an unusual amount of time in the car.

“We had the impression this woman lived in her car. She never left it,” a neighbour identified as Pascale told Le Parisien newspaper.

“I remember seeing her several times a week with her car parked in a lot about 200m from her home. The boot was always open. I was wondering what she could be doing,” she said. 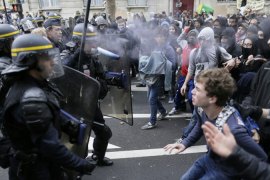 Police use tear gas against some protesters as students disrupt some 50 schools over expulsions of foreign pupils.