Residents of the oil-rich Abyei region claimed by both Sudan and South Sudan have continued to cast their ballots in an unofficial referendum to decide which country they belong to.

The voting began on Sunday with neither Sudan nor South Sudan endorsing it, and only one of two tribes that inhabit the disputed district, the Ngok Dinka, took part.

The Arab Misseriya, who have close ties with Sudan, boycotted saying they would not recognise the result, expected on October 31.

Observers said the move was likely to inflame tensions between the two tribes and the countries to which they owe allegiance.

“The people are voting to choose to join South Sudan or to be part of Sudan,” Rou Manyiel, chairman of the Abyei civil society organisation, told the AFP news agency.

“There are long queues of people, but things are peaceful and calm,” Manyiel added, a senior Ngok Dinka community leader. “They began to vote on Sunday and they will finish voting on Tuesday, the third day.”

An AFP photographer in Abyei said residents stood in long queues to cast their votes, with ballot papers marked with two symbols to choose from: a pair of clasped hands symbolising a vote to be part of Sudan, and a single hand if people want to join South Sudan.

Sudan and South Sudan have previously clashed over Abyei, patrolled by a 4000-strong UN force led by troops from Ethiopia.

The region is home to the settled Ngok Dinka, closely, connected to South Sudan, as well the semi-nomadic Arab Misseriya, who traditionally move back and forth from Sudan grazing their cattle.

Only the Ngok Dinka are voting in the referendum, although organisers insist it is open to all.

Abyei was meant to vote on whether to be part of Sudan or South Sudan in January 2011 – the same day Juba voted overwhelmingly to split from the north – as part of the 2005 peace deal which ended Sudan’s civil war.

That referendum was repeatedly stalled, and Sudanese troops stormed the enclave in May 2011 forcing over 100,000 to flee southwards, leaving a year later after international pressure.

Ngok Dinka leaders last week said they would press ahead with their own vote despite warnings by the United Nations and the African Union that any such unilateral move could inflame tensions in the flashpoint zone.

Although both leaders said their talks were “fruitful”, no breakthrough was made, and Abyei remains one of the most important and sensitive issues left unresolved since South Sudan seceded from Sudan following a referendum in January 2011.

Sudan fought a bitter civil war with southern rebels, ending the two-decade conflict with a peace agreement in 2005. The peace accord paved the way for a referendum which led to the rebels’ secession and the formation of South Sudan in July 2011. 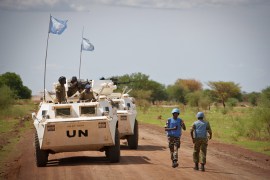 Will the two Sudans ever agree over Abyei?

As the two countries are given six more weeks to reach agreement on the region, we ask how the dispute can be resolved.