Police in the Maldives have forced the postponement of the re-run of the presidential poll, declaring the vote illegal and blocking ballot papers from leaving the offices of the Elections Commission.

The election had been due to take place on Saturday, but “a new date for elections will be informed later”, the independent Elections Commission said in a statement.

The Indian Ocean chain of islands has been in turmoil since February 2012 when former President Mohamed Nasheed, who won the Maldives’ first free elections in 2008, was ousted in disputed circumstances his supporters called a coup.

“We cannot proceed with the election if police are obstructing it,” Thowfeek told a news conference. He said the commission was disappointed and frustrated and that police had “overstepped their authority”.

Thowfeek also doubted the election could be held before the end of the current presidential term on November 11.

The Supreme Court annulled the results of a September 7 presidential election in which Nasheed came first and ordered a re-vote, agreeing with losing candidate Qasim Ibrahim that the voters’ register listed fictional names and dead people.

Police spokesman Abdulla Nawaz told the AFP news agency that they considered it was illegal to stage the election in violation of a Supreme Court order that required all candidates to approve electoral lists.

Only Nasheed has approved the list. Ibrahim and Yaamin Abdul Gayoom, a brother of the country’s long-time autocratic leader Maumoon Abdul Gayoom, have not signed them.

“Only one candidate had signed the voter register and therefore it would have been a violation of the Supreme Court guidelines for the election to go ahead,” the police spokesman said.

Abdulla Sodig, mayor of Addu City, told Al Jazeera that it was clear there were no technical issues and there was only a political motive behind the move by the police. “Since the coup last year the police [has been] controlling the whole country… they are all trying to continue the coup government,” he said.

Nasheed, who said he was forced to step down last year at gunpoint by police and army officers, fell five percentage points short of an outright majority win in the first round.

He was set for a runoff with Gayoom when the Supreme Court annulled the election, which was hailed by the United Nations, United States, India and Commonwealth observers as largely free and fair.

After Saturday’s election was called off, Hamid Abdul Ghafoor, a spokesman for Nasheed, accused the judiciary and police of being the pawns of Gayoom and called for international engagement to have an election soon.

Others also decried the cancelled vote.

“This clearly undermines the democracy and violates the people’s right to vote,” said Mohamed Visham, editor of local daily Haveeru .

But he added that the election setbacks would not discourage Maldivians from believing in democracy.

“All hope is not lost. There is still time to have an election before November 11,” he said, referring to the date when President Mohamed Waheed Hassan’s term ends. 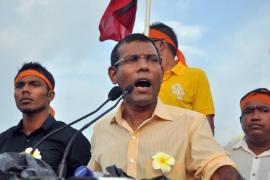 The Maldives: Mired in presidential intrigue

Archipelago caught in political uncertainty as rival politicians set their eyes on elections amid rising tensions.

Mohamed Nasheed detained for missing a court appearance relating to charges he illegaly arrested a judge while in power. 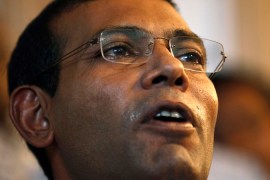 Court calls fresh presidential elections on October 20 after third-place candidate alleged fraud in the first round.