Hundreds of thousands of people have flocked to the streets of the Vietnamese capital to bid a final farewell to a legendary war hero who led the Southeast Asian nation to victory over the French and then the Americans.

Giap, who died on October 4 at age 102, was revered in Vietnam only second to his mentor, former President Ho Chi Minh.

“Long live General Vo Nguyen Giap,'” people chanted as his flag-draped coffin passed by on a lorry-drawn artillery carriage in Hanoi on Sunday.

“You, comrade, have made a great and excellent contribution to the revolutionary cause of our party and nation,” Nguye said in a eulogy read out at the funeral house.

“Your personality and your great contribution were strongly imprinted in the heart of the people.”

Giap’s body was to be flown for burial in his home province of Quang Binh in central Vietnam later on Sunday.

In the lead-up to his funeral on Sunday, an estimated 150,000 people visited Giap’s colonial villa in Hanoi to pay their respects.

Several tens of thousands of people lined up on Saturday to say farewell when his body was laid in state at the national funeral house.

Giap will be buried at his home province of Quang Binh in central Vietnam later on Sunday in accordance with his wishes and those of his family instead of the Mai Dich cemetery in Hanoi where most dead Vietnamese high-ranking officials were buried. 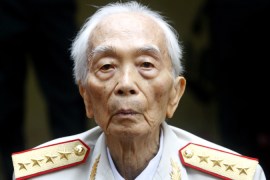 Legendary general Vo Nguyen Giap was known for scripting Vietnam’s victory in wars against France and US.