One of the world’s leading medical journals has supported the possibility that Yasser Arafat, the longtime Palestinian leader, was poisoned with the radioactive element polonium 210.

The British The Lancet journal has published a peer review of last year’s research by Swiss scientists on Arafat’s personal effects.

It endorsed their work, which found high levels of the highly radioactive element in blood, urine, and saliva stains on the Palestinian leader’s clothes and toothbrush.

The work of the experts at Lausanne University, Switzerland, was triggered by an Al Jazeera investigation, and also led to Arafat’s body being exhumed in November 2012 for further testing.

In October 2004, Arafat fell ill, suffering from a number of symptoms, including nausea and abdominal pain.

Within a few short weeks, his health became significantly worse, and he was transferred from his base in Ramallah in the occupied West Bank, to Percy Hospital in France.

His situation continued to worsen, and he suffered from acute renal failure, and entered into a neurological coma.

Despite several scientific tests, there was no evidence of poison, and the cause of his illness remained unidentified.

Following a nine-month investigation by Al Jazeera, in which several of Arafat’s key belongings were sent to Paris for tests, results revealed they contained abnormal levels of polonium; a rare, highly radioactive element.

At the time of the investigation, Dr Francois Bochud, the director of the Institut de Radiophysique in Lausanne, told Al Jazeera: “I can confirm to you that we measured an unexplained, elevated amount of unsupported polonium-210 in the belongings of Mr Arafat that contained stains of biological fluids.”

The results of the investigation led Suha Arafat, his wife, to call on the Palestinian Authority to have his body exhumed.

According to the Lancet publication, “[the] findings support the possibility of Arafat’s poisoning with 210Po … on the basis of [the] forensic investigation, there was sufficient doubt to recommend the exhumation of his body in 2012”.

The results of that latest analysis are expected shortly. 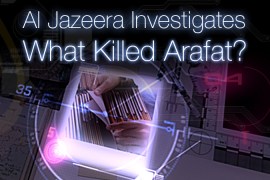 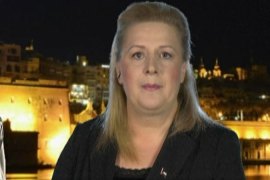 Arafat’s widow speaks out after exhumation

The widow of the late Palestinian leader says she was never offered an autopsy on her husband’s corpse.