The leader of Greece’s far-right Golden Dawn party was jailed pending trial on charges of belonging to a criminal group, court officials said on Thursday.

The Golden Dawn leader Nikolaos Mihaloliakos appeared before investigating magistrates and a prosecutor to respond to charges of founding and participating in a criminal organisation. Mihaloliakos has denied the charges against him.

The decision to jail the party chief was a boost for the Prime Minister Antonis Samaras’ efforts to clamp down on Golden Dawn after a party sympathiser fatally stabbed an anti-fascism rapper last month.

Mihaloliakos was arrested on Saturday alongside other party members as part of the government’s efforts of rein in a party it says is a neo-Nazi criminal gang.

If convicted, Michaloliakos faces at least 10 years in prison, alongside other members of his party, including his deputy Christos Pappas.

“We have a golden opportunity to purge our society of violence,” Greek government spokesman Simos Kedikoglou told Skai Radio, calling the group “a criminal organisation that tried to cover itself under a political cloak.”

The court appearance comes after three arrested Golden Dawn members were freed pending their trial on charges of belonging to a criminal group while a fourth member was jailed.

The party’s spokesman Ilias Kasidiaris was released on bail of 50,000 euros and restrictions from leaving the country.

Ilias Panagiotaros and Nikos Michos were released with travel restrictions while Yannis Lagos was sent to jail pending trial.

All four denied charges against them in a marathon plea session before an investigating magistrate that ended early on Wednesday after more than 18 hours.

Kasidiaris said he was a victim of political persecution.

Golden Dawn was the country’s third most popular party until the September killing led to nationwide protests and a government crackdown on the group long accused of attacking immigrants, charges that it denies.

The investigation has revealed a series of “criminal acts” by the group, culminating in the alleged murder of anti-fascist musician Pavlos Fyssas by a self-confessed neo-Nazi on September 18, according to a government report, parts of which were leaked in the media on Monday.

Golden Dawn regularly organised “assault militias” in which dozens of members would swarm the streets, hitting any immigrant they saw with clubs, it said. 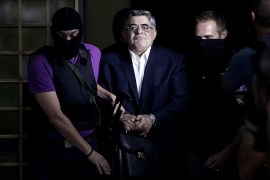 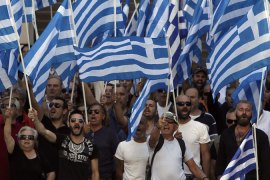 Facing up to Greece’s far right

Will the arrests of Golden Dawn members halt the party’s growing popularity permanently?