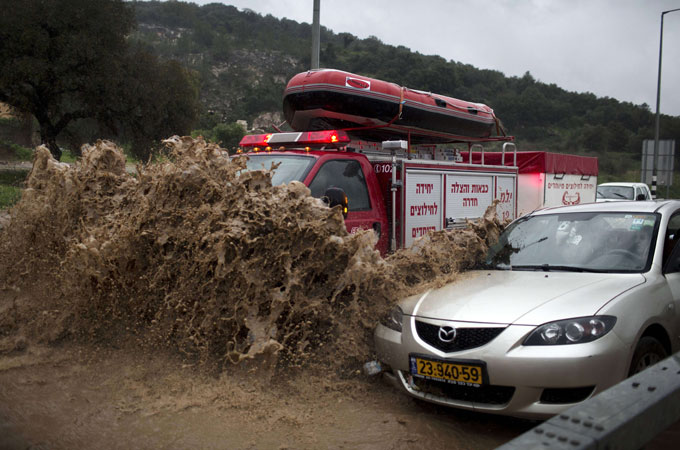 A fireman’s truck drives through a flooded road near the Israeli-Arab town of Kfar Qara, in central Israel [AFP]

At least six people are known to have died after severe weather swept across the eastern Mediterranean. Torrential rains, heavy snow and gale force winds hit the Levant countries on Tuesday causing flash flooding leading to widespread disruption across the region.

Main access routes to Tel Aviv were forced to close and a man was killed and two others injured after their car was swept away by heavy rain in the West Bank town of Attil. Another three people died after their car was blown to the side of the Tel Aviv-Jerusalem highway. Dozens of people were also injured in weather related accidents across Israel.

For the second day in a row, torrential rains swept through Jordan, sparking widespread flooding and traffic chaos, but bringing welcome water to reservoirs in one of the world’s 10 driest countries. Many road tunnels had to be closed and traffic became gridlocked for a time as the flash floods overwhelmed the capital’s drainage system.

In the north of the country, relief workers had to distribute aid to Syrian refugees who were injured in a stampede in a camp. Hundreds of tents were destroyed by the heavy rains and the howling winds.

Snowfall made roads unusable in the Syrian capital, Damascus, leading to chaotic scenes out of Beirut after heavy rain and snow blizzards hit much of Lebanon. The storms here are the worst in over a decade, killing at least two people.

Egypt has also been affected by the violent storms. The port of Alexandria has been closed for the last three days as high winds battered the city causing power cuts.

Further west, 10 fishermen were reported missing off the coast and searches to find them have been hampered by the on-going bad weather.

Greece and Turkey have also been affected by winter storms with heavy snow causing problems for many. The bad weather is expected to linger for across the eastern Mediterranean for a few days yet.

Even Jerusalem could see some snow over the next 36 to 48 hours as temperatures struggle to get above freezing. The Israel Meteorological Service are already saying that this winter looks set to be the wettest in a decade.