President of the Central African Republic has labeled the country’s Seleka rebels, who have seized control of much of the country’s north, as “mercenary terrorists”, in an exclusive interview with Al Jazeera.

Francois Bozize’s verbal attack on Tuesday came as the government and rebels prepare to hold peace talks in Libreville, the capital of Gabon, in the coming days.

“I call them mercenary terrorists because they are being paid by those who sent them and are terrorising the population. They pillage, they rape and destroy,” he told our network.

“We will go to Libreville to defend democracy that has existed in Central Africa for more than 10 years. We can not let it be destroyed by some opportunists.”

Rebel leaders and the delegation representing Bozize’s government, along with UN representatives arrived for the peace talks.

Al Jazeera’s Nazanine Moshiri reporting from Libreville reported “Senior diplomats are hopeful that Bozize will arrive in the next couple of days.”

“These talks are all about trying to get Seleka to sign a ceasefire – that is the priority. And to sign the Pact, which was made in 2008 in Libreville between the rebels at the time and the government, and basically to put their arms down.”

The rebels, collectively known as Seleka, behind the recent instability signed a 2007 peace accord allowing them to join the regular army, but their leaders say the deal wasn’t fully implemented.

Talks with the rebel representatives had been expected to start on Tuesday, but a plane carrying the government delegation along with members of the country’s political opposition failed to leave Bangui, the capital, as scheduled.

Rebels, who have arrived in Gabon, said they were halting their advance before reaching Bangui in an attempt to give the peace negotiations a chance.

Meanwhile, Denis Sassou-Nguesso, president of the Republic of Congo, said negotiations were to begin no later than Friday. He met the embattled leader of CAR, Bozize, on Monday.

Sassou-Nguesso declined to comment on reports that rebels, who now control much of the country’s north, are still seeking Bozize’s ouster as a condition of the talks.

Earlier on Monday, Eric Massi, who identifies himself as a spokesman of the rebel alliance reiterated calls for the removal of the president, saying he has “lost all credibility” to lead the country.

“He has to leave power,” Massi told Al Jazeera from Paris.

He rejected Bozize’s offer to form a coalition government with the rebels, instead calling for a “peaceful transfer of power”.

While the rebels have halted their advance toward Bangui, they now hold a dozen cities and towns, and a spokesman claimed the fighters could still take the government-fortified city of Damara or Bangui but were holding back out of concern for the 700,000 people who live there. 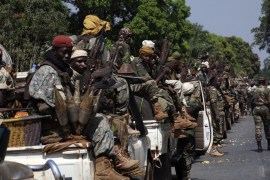 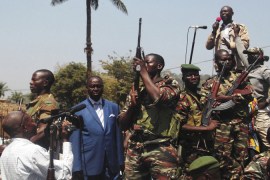 Will a rebel coup looking to unseat the government place the country in yet another humanitarian disaster? 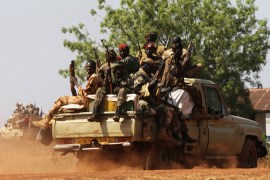