Firefighters battled scores of fires raging across southeast Australia with officials evacuating national parks and warning that blistering temperatures and high winds had led to “catastrophic” fire conditions in some areas.

“This is a very dangerous day,” Gillard said. “It is very important that people keep themselves safe, that they listen to local authorities and local warnings.”

Thousands of firefighters were on standby across the nation’s most populous state of New South Wales, where fire authorities said conditions were at catastrophic threat levels – the most severe rating available – in parts of the state.

Hundreds of people were forced to evacuate homes as fires raged, according to Reuters.

Al Jazeera’s Andrew Thomas, reporting from Sydney, said three different areas of the state are now at that “catastrophic” level of danger.

“I have just spoken to someone in one of the most at risk areas and he tells me that authorities have just given them an hour to get out,” he said.

All state forests and national parks were closed as a precaution and total fire bans were in place.

“We are shaping up for one of the worst fire danger days on record,” Shane Fitzsimmons, New South Wales rural fire service commissioner, said.

Introduced after the 2009 Black Saturday firestorm in Victoria, which claimed 173 lives, a catastrophic rating means fires will be uncontrollable, unpredictable and fast-moving, with evacuation the only safe option.

There are fears that the city of Sydney could be threatened next. But so far, the fires are in “relatively unpopulated areas”, Thomas said.

Thousands flocked to the city’s iconic Bondi Beach to escape the heat as temperature hit 41.8C, while an ambulance crew was called to help treat a woman suffering from heat exhaustion near the Sydney Opera House.

Of 100 fires burning across the state, 21 are uncontained, although none was posing any immediate threat.

“But clearly, under today’s conditions, we are concerned with those and we will be monitoring them very carefully,” Fitzsimmons said.

There were also extreme conditions in Victoria, with one fire at Kentbruck in the state’s southwest doubling in size overnight with about 500 firefighters and 10 aircraft battling to stop it threatening rural communities.

A handful was out of control and Tasmanian Fire Service station officer Phil Douglas said authorities were ready for possible evacuations at Lake Repulse and Forcett.

The severe fire conditions replicated those of 2009, when “Black Saturday” wildfires in Victoria state killed 173 people and caused $4.4bn worth of damage.

No deaths have been reported so far from the latest fires that are a regular occurrence particularly in the hot summer months between December and February. 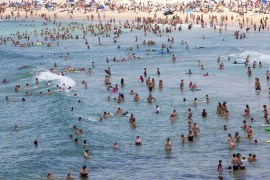 In Pictures: Wildfires rage in Australia

Parts of New South Wales were placed on high alert on Tuesday after the risk of wildfires was classed as ‘catastrophic’. 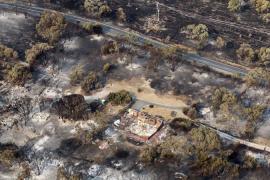 The damage to buildings is random with some completely destroyed while others remain intact. 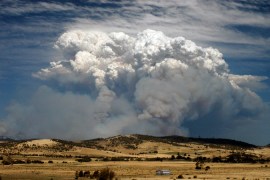 Blazes on Australian island destroy at least 80 properties, as heatwave continues over much of Tasman Peninsula.