US President Barack Obama has nominated his top counterterrorism adviser, John Brennan, as the next director of the Central Intelligence Agency.

On Monday Obama also formally announced his nomination of Chuck Hagel as his next defence secretary.

“I urge the senate to confirm them as soon as possible so we can keep the American nation secure, and the American people safe,” Obama said.

Brennan was considered by Obama for the position in 2008, but the 25-year CIA veteran withdrew his name as he was being questioned at the time about his connection to enhanced interrogation techniques during the George Bush administration.

Al Jazeera’s Rosiland Jordan, reporting from Washington, said: “Brennan speaks Arabic and the president felt he had the qualifications and experience. However, there are many questions about whether he was sufficiently against torture.”

Our correspondent added: “Obama [initially] put him in the White House in a position that did not require political confirmation.”

But he has since spoken out against and denied any involvement in the controversial tactics, which include waterboarding.

Brennan will succeed retired general David Patraeus, who resigned in November 2012 amid a scandal revolving around an extramarital affair.

The nominees for the Pentagon and the CIA must be confirmed by the senate.

Some Republicans have already declared their public opposition to Hagel replacing Leon Panetta, the Pentagon chief, in Obama’s second-term cabinet.

Senator Mitch McConnell, the top senate Republican, said on Sunday that he was reserving judgement on whether to support him.

He predicted that Hagel, a former Nebraska senator, would face serious questions about his stands on Iran and Israel.

Any nominee must have “a full understanding of our close relationship with out Israeli allies, the Iranian threat, and the importance of having a robust military”, McConnell said on ABC television’s This Week.

Hagel has also been attacked by gay rights groups for remarks in 1998 questioning whether an “openly aggressively gay” nominee could be an effective US ambassador. He apologised for the comments last month saying they were “insensitive”.

If confirmed, Hagel would become the first former enlisted soldier to lead the Pentagon.

“The work of protecting our nation is never done. We’ve still got much to do,” Obama said during the nomination announcement.

“Chuck Hagel represents the bipartisan position that we need more of in Washington … and has earned the respect of both Republicans and Democrats.”

Hagel has criticised discussion of a military strike by either the US or Israel against Iran. He also has backed efforts to bring Iran to the table for talks on future peace in Afghanistan.

Some American politicians have been troubled by his comments and actions on Israel, including his reference to the “Jewish lobby” in the US.

The second-ranking senate Republican, John Cornyn of Texas, said in a statement that making Hagel defence secretary would be “the worst possible message we could send to our friend Israel and the rest of our allies in the Middle East”.

Cornyn did not say he would try to block a Hagel nomination.

Obama has nominated Democratic Senator John Kerry of Massachusetts as his next secretary of state, in what was the president’s first step in filling out his second-term cabinet and national security team. 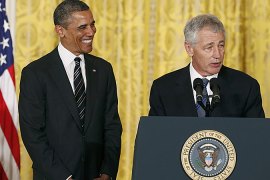 Is Chuck Hagel the man for the job?

As Obama picks his new national security chiefs, we examine the nomination of Chuck Hagel as defence secretary. 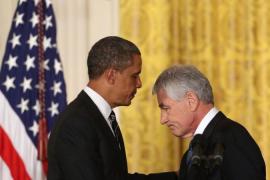 Opinions divided over US president’s nominations of Chuck Hagel and John Brennan to head Pentagon and CIA respectively. 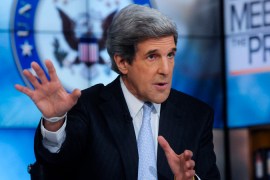