Rebels in the Central African Republic have taken the southern town of Alindao around 100km from the border with the Democratic Republic of Congo, a government spokesman has confirmed.

The military advance on Saturday came after the UN Security Council called on rebels to halt their offensive and withdraw from other towns and cities they had seized earlier.

“There’s certainly a big rebel presence in the [Alindao] area and no resistance from government forces,” said Al Jazeera’s Andrew Simmons, reporting from the capital, Bangui.

“[Government troops] have probably moved out of the area altogether, even as more and more [foreign] troops reinforce the government army.”

The Council said in a statement that the rebel advances “gravely undermine” the country’s security and stability, “constitute a threat to the civilian population, and hinder the provision of humanitarian assistance”.

Rebels calling for President Francois Bozize to step down have seized almost a dozen towns in a month, but they halted their advance on Bangui on December 29 pending negotiations.

The Security Council called on all parties to seek a peaceful solution and engage in negotiations scheduled to be held in Libreville, Gabon, starting on Tuesday “without preconditions and in good faith”.

It encouraged the government, armed groups, the political opposition and other interested parties to use the talks “to negotiate a comprehensive political solution”.

Pakistan’s UN Ambassador Masood Khan, the current council president who read the statement, was asked whether the talks would definitely take place given uncertainty about participation of all the rebels and other groups.

“Right now, preparations are being made and we’re hoping the talks will take place, and all parties are being urged in that direction,” Khan said.

“The talks are important to reduce tension and de-escalate the situation and look towards diplomatic solutions.”

The rebel coalition Seleka, which means “alliance” in the local Sango language, is made up of four separate groups which had previously fought one another.

Bozize has offered to form a government of national unity but the rebels have questioned his sincerity and are demanding that he relinquish power.

Rebels also want the government to respect previous peace accords providing for the disarmament, demobilisation and reintegration of former rebels into society.

The council expressed concern about reports of arrests, detention, looting and the targeting of ethnic minorities as well as the recruitment and use of children in the conflict.

Council members urged all parties to stop violence against civilians and to respect human rights and said those responsible should be held accountable.

The UN children’s agency on Friday said it has received “credible reports that rebel groups and pro-government militias are increasingly recruiting and involving children in armed conflict”.

Central African Republic is a desperately poor, landlocked nation that has suffered numerous rebellions since independence from France.

President Bozize himself came to power in 2003 through a rebellion that was backed by Chadian forces and has since won two elections. He says he will not leave before finishing his term in 2016.

Despite the nation’s wealth of gold, diamonds, timber and uranium, the government remains perpetually cash-strapped.

The nation’s woes also have been compounded by its proximity to other conflict-ridden states, including Sudan’s Darfur region. Uganda’s notorious Lord’s Resistance Army also has taken advantage of the weak state to take refuge in the Central African Republic – attacking and abducting civilians with near-impunity. 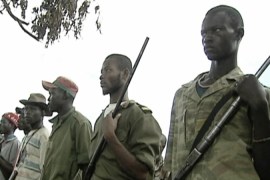 UN decries use of child soldiers in CAR 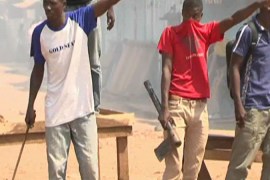 As rebel coalition grows bolder, the president of Central African Republic fires his son from post of defense minister.