Bushfires have erupted on the Australian island of Tasmania, destroying at least 80 properties, police have said, as much of the region suffered a heatwave.

East of Hobart, the state capital, as many as 2,000 people have taken refuge in the town of Nubeena, while another 700 sheltered at the nearby historic Port Arthur site.

Others have been ferried to emergency accommodation in Hobart.

Officials had been investigating a report that one person died in the blaze on Friday, but police said on Saturday that there were no confirmed deaths or injuries from the fire.

“We are hoping there have been no deaths associated with these fires but until we have the opportunity to get in and literally go through property by property we can’t confirm there hasn’t been one or more deaths,” acting police commissioner Scott Tilyard said.

As fires flared on Friday, temperatures rose above 40 Celsius in Tasmania, a southern island state known for its cooler climate.

Conditions had eased across much of the region on Saturday, but fire officials warned that the danger from some of the fires remained high.

One of the worst affected areas was the small community of Dunalley, about 55km east of Hobart, where police estimate about 30 percent of buildings have been destroyed, including the police station and school.

In nearby Connelly’s Marsh, about 40 percent of buildings have been ruined.

Prime Minister Julia Gillard said it was a “tragic time for those who have suffered loss in the devastating Tasmanian bushfires” and that the government would help support those affected.

“We want to make sure now, as the fire’s still there, that people are safe, and then we’ll support communities,” Gillard told ABC TV.

Bushfires are also burning in other parts of Australia, including South Australia, Victoria, New South Wales and Queensland.

Bushfires are common during the Australian summer. In February 2009, hundreds of fires across Victoria state killed 173 people and destroyed more than 2,000 homes. 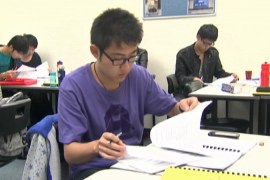 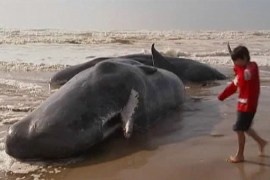 Marine and wildlife experts work to free two beached whales after deaths of 22 others stranded on sand.