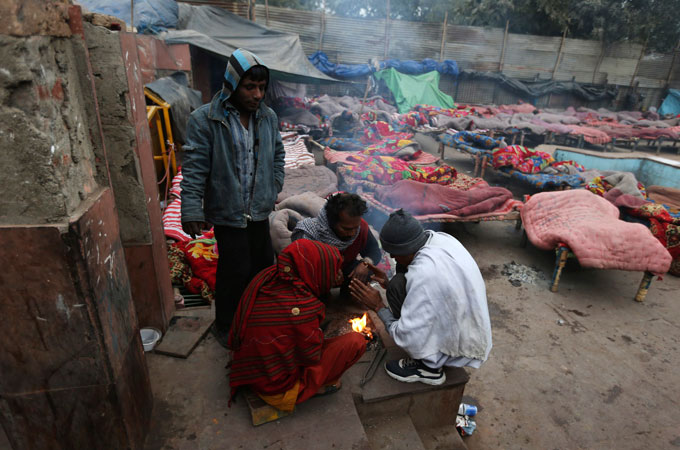 A group of homeless people try to warm up by an open fire on a cold winter morning in the old quarters of New Delhi. [Reuters]

Cold winter weather is currently sending shivers across northern India after the capital had its coldest day in 44 years. We’ve also seen heavy snowfall over the higher ground and dense fog has blanketed a good part of the region, causing travel chaos in the process.

The temperature in New Delhi struggled to reach a high of 9.8 Celsius on Wednesday, making it the coldest day here since 1969. Overnight the temperature fell to just 4.4 Celsius, which is cold enough for a touch of ground frost. The India Meteorological Department said temperatures across the north were 4 to 10 degrees Celsius below normal.

The authorities say that more than 100 people have died of exposure as northern India deals with the bitter cold. At least 114 people have died from the cold in the state of Uttar Pradesh so far; 23 of those died in the past 24 hours.

The bitter cold and icy winds have inevitably been particularly harsh on the many homeless people who have been struggling to keep warm by huddling around bonfires. Many of the dead were poor people whose bodies were found in parks and other open spaces.

The lowest temperature was recorded in Himachal. Here, Keylong recorded an overnight minimum of minus 9 degrees. Temperatures also dipped below freezing across much of Rajasthan.

Cold air draining down from the Himalayas often causes problems at this time of year and can lead to the formation of stubborn and extensive fog patches. The relatively weak sunshine is unable to burn it off and it tends to become trapped for several days, if not weeks.

Visibility on the runways at the Indira Gandhi International Airport was around 50 metres for much of Wednesday. More than 30 flights were delayed and at least seven were cancelled altogether.

The cool weather is expected to stay in place here for at least the next week or so. The fog should thin and break as we go through the weekend but temperatures are likely to struggle to reach the mid to high teens for some time to come.