Violence has erupted across Egypt as tens of thousands of people took to the streets to deliver an angry backlash against President Mohammed Morsi and his Muslim Brotherhood, demanding he step down on the second anniversary of the revolution that toppled Hosni Mubarak.

At least seven people were killed on Friday, and 476 others wounded, in the clashes in several cities, a police source told Al Jazeera.

Two years to the day after protesters first rose up against the autocratic ex-president, the new phase of Egypt’s upheaval was on display: the struggle between the ruling Muslim Brotherhood and their opponents, played out against the backdrop of a worsening economy.

At least six people, including a 14-year-old boy, were killed in Suez, where protesters set ablaze a building that once housed the city’s local government. Another person died in clashes in Ismailia, another Suez Canal city east of Cairo.

The army deployed troops to Suez late on Friday to take over control of the city’s security.

In response to the deaths, Morsi called on Egyptians to reject violence. The president urged “citizens to adhere to the values of the revolution, express opinions freely and peacefully and renounce violence,” said a message posted on his Twitter account.

“I’m offering my condolences to all Egyptians, the martyrs in Suez and the policemen who were the victims of ugly violence,” he said. “Egypt’s [security] apparatuses will chase the criminals and bring them to justice. They are also doing their best to protect and secure the peaceful demonstrations.”

In Cairo, thousands took to the capital’s now-iconic Tahrir Square earlier in the day, where youths protesting against President Morsi clashed with Cairo police.

Al Jazeera’s Sherine Tadros, reporting from Cairo, said that the crowds were starting to clear by late evening. although sporadic clashes, she said, were still taking place and police continue to use teargas to push protesters away from government buildings.

“They’re shouting right now, saying ‘irhal’ – leave, leave – in reference to Mohamed Morsi, and the feeling here on the street…is the the Muslim Brotherhood aren’t interested making changes to better the lives of people,” said Tadros.

“What they’re interested in is strengthening their grip on power.” 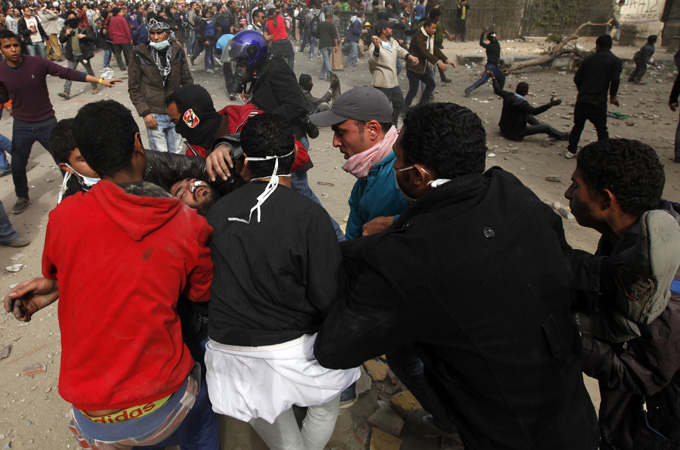 Dozens of protesters continued to arrive in the area surrounding the mosque.

Protesters also stormed the governorate headquarters in the canal city of Ismailiya and attempted to storm two other buildings elsewhere, witnesses said.

They broke into a building used by security services, setting fire to one room and looting furniture.

Protesters surrounded the governorate building in Damietta and in the Nile Delta city of Kafr el-Sheikh they stormed the courtyard of the governorate leading to clashes.

Al Jazeera’s Mike Hanna, reporting from the Egyptian capital, said that demonstrators there are “attempting to get through to the Ministry of the Interior, which has been barricaded off.”

Our correspondent said the people protesting in Cairo, Alexandria, Port Said and Suez were angry and were “not convinced that their government is acting in their interests”.

Calls for mass street protests against Morsi and the Muslim Brotherhood, from which he hails, have been led by the secular-leaning opposition.

Protesters have been urged to use the same slogan used during the uprsing in 2011: “Bread, freedom, social justice.”

Mohamed ElBaradei, an opposition leader and former head of the UN’s atomic agency, wrote on his Twitter account: “Go out into the squares to finally achieve the objectives of the revolution”.

Police in Cairo also deployed tear gas outside the presidential palace in an effort to keep protesters away from the building.

Our correspondent in Cairo said that the Muslim Brotherhood had sent out messages discouraging its members from participating in the protests, suggesting that they instead perform acts of civic responsibility, such as planting trees.

“And these things have been happening,” said Mike Hanna. He added that despite protests, there were also crowds celebrating the second anniversary of the revolution.

Earlier on Thursday, tensions ran high as police clashed with protesters who tried to dismantle a wall of concrete blocks.

The Muslim Brotherhood has not officially called for its own rallies, choosing to mark the anniversary by launching a charitable and social initiative dubbed “Together we will build Egypt.”