Jordan has launched an urgent aid appeal to cope with a refugee crisis after an estimated 20,000 Syrians crossed over into the country over the past week.

Foreign Minister Nasser Judeh said on Thursday that his country had called for urgent support from international donors to help it deal with an “unprecedented” number of Syrian refugees.

“What we have seen in terms of influx of Syrian refugees coming to Jordan is … unprecedented, larger than any other
time in the last two years… we have had 20,000 Syrians coming into Jordan since last Thursday.” Judeh told the Reuters news agency.

A record 6,000 Syrians crossed into Jordan on Tuesday alone and the influx has pushed Jordan’s lone Syrian refugee camp well beyond its 60,000-person capacity.

Earlier this month, Jordan said it hosted 285,000 Syrian refugees, more than half of those displaced by the conflict since March 2011.

Despite pledging to maintain an open border policy, Jordan has indicated in recent weeks that it will close the frontier should Syria tip into “chaos.”

Government spokesman Samih Maaytah said Jordan was to keep the borders open despite the dramatic influx. He added that closing the border would be a “last resort.”

Jordan has said the rapidly growing refugee population cost the country some $600 million in 2012 – a figure forecast to reach $800 million in 2013 should the crisis persist.

Abu Hani al-Darawi, a coordinator with the FSA, said aerial attacks by Syrian government troops on villages and other urban centres have driven tens of thousands of Syrians south toward the Jordanian border, where some 15,000 have amassed.

“With missiles falling in every town and every village, nowhere in Syria is safe,” al-Darawi said. “For many Syrians, the choice now is either Jordan or death.”

Meanwhile, Syrian warplanes bombed rebel-held areas near Damascus on Thursday as President Bashar Assad’s troops battled opposition fighters for control of a strategic road that links the capital with the main airport.

The fighting around Damascus is part of the government offensive to dislodge rebels from towns and villages ringing close to the country’s capital.

Syrian troops also bombarded besieged districts of Homs, as clashes raged unabated in the west of the central city for the fifth day a row, the Syrian Observatory for Human Rights said.

Six rebels were among seven people killed by regime shelling and overnight firefights in the Jobar district, the Britain-based watchdog said.

The Syrian Revolution General Authority, a network of opposition activists on the ground, said regime troops used heavy artillery and clashed with the rebel Free Syrian Army (FSA) in an attempt to storm the west side of the city.

“The Syrian regime has escalated its attack on Homs city and its environs in order to disperse the people on sectarian lines and achieve what it believes will be a final victory over Homs,” said the Syrian National Council (SNC), a major part of the opposition in exile.

The uprising against Assad’s rule is now almost two years old. At least 60,000 Syrians have been killed and another 650,000 are now refugees abroad, according to the United Nations. 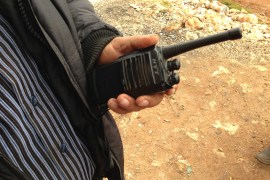 Walkie-talkies as lifeline in wartime Syria

Hand-held transceivers help residents to communicate and also keep track of impending attacks in absence of other means. 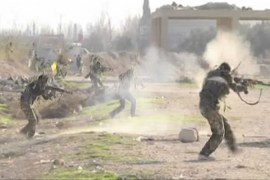 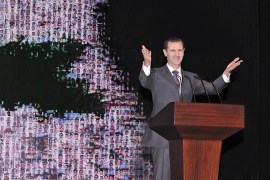 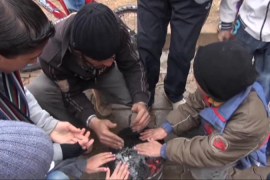