Binyamin Netanyahu, the Israeli prime minister, has reached out to a new centrist party after his right-wing bloc lost eleven seats in the parliamentary elections, taking only 31 of the 120 seats in the Knesset.

The results on Wednesday defied forecasts that Israel’s next government would veer sharply to the right at a time when the country faces mounting international isolation, growing economic problems and regional turbulence.

A coalition that joins parties with dramatically divergent views on peacemaking, the economy and the military draft, could however, easily be headed for gridlock.

Israeli media said that with 99.8 percent of votes counted, each bloc had 60 of parliament’s 120 seats.

Commentators said Netanyahu, who called early elections three months ago expecting easy victory, would be expected to form the next government because the rival camp drew 12 of its 60 seats from Arab parties that traditionally are excluded from coalition building.

A surprising strong showing by a political newcomer, the centrist Yesh Atid, or There is a Future, party, in Tuesday’s vote turned pre-election forecasts on their heads and dealt a setback to Netanyahu.

Yesh Atid’s leader, Yair Lapid, has said he would only join a government committed to sweeping economic changes and a serious push to resume peace talks with the Palestinians, which have languished throughout Netanyahu’s four-year tenure.

The results were not official, and there was a slim chance of a slight shift in the final bloc breakdowns and a possibility that Netanyahu would not form the next government, even though both he and Lapid have called for the creation of a broad coalition.

Al Jazeera’s Sherine Tadros, reporting from Tel Aviv, said, “It will be interesting to see how he balances the demands of the different parties he’ll be entering into coalitions with.

“A lot of people will tell you that those undecided were put off by the idea of far-right wingers dominating politics for the next four years,” she said, referring to the drop in figures for Netanyahu.

Following the results, Lapid posted just one word on his Facebook page: “Thanks”.

Al Jazeera’s Patty Culhane, reporting from Washington, DC, commented on the tense relationship between US President Barack Obama and Netanyahu.

“Officially in the US they are not really weighing in yet,” she said, regarding Netanyahu’s victory. “Behind the scenes, we know [President Barack] Obama and Netanyahu do not get along.”

“President Obama has faded the idea of the Palestinian peace process, as he doesn’t believe Netanyahu wants peace,” she said.

Netanyahu called Lapid early on Wednesday and offered to work together.

“We have the opportunity to do great things together,” Likud quoted the prime minister as saying.

“I call on the leaders of the political establishment to work with me together, to the best of their ability to form as broad a government as possible that will contain moderate forces from the left and right, the right and the left, so that we will truly be able to bring about real change,” he told supporters after initial results.

“If he brings Lapid into his government, this would improve the image of the Netanyahu government in the eyes of the world. But it won’t make him stop building settlements, particularly in east Jerusalem,” said Mohammed Ishtayeh, a senior adviser to President Abbas.

Palestinian officials closely followed the Israeli election campaign, fearing Netanyahu’s ambitious plans for settlement construction over the next four years could prove lethal to their dreams of a state.

Ahmed Assaf, spokesman for Fatah, the Western-backed party of Palestinian President Mahmoud Abbas, said: “The Palestinian people are the main losers from this duel between the racist right-wing parties.”

Palestinians have low expectations for the peace process following the elections.

“Our situation will be worse than before because the settlements were built during Netanyahu’s time,” a Palestinian in the West Bank said. 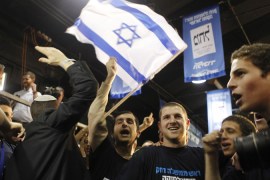 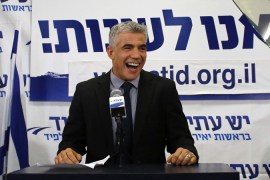 Former TV presenter Yair Lapid could end up with a key role in the next government. 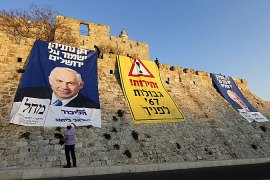 Is Israel leaning further to the right?

We examine how domestic issues will work to set the tone for the new government after Tuesday’s parliamentary election. 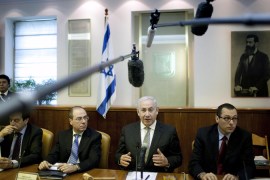 Timeline: Politics in the state of Israel