An estimated 800,000 people have gathered in Washington, DC, to attend US President Barack Obama’s inauguration speech after he took the public oath of office.

Addressing the flag-waving crowd on the National Mall on Monday, Obama asserted his determination to keep in place the social safety net for the poor, the ailing and the elderly.

“My fellow Americans, we are made for this moment, and we will seize it, so long as we seize it together,” he said, moments after taking the oath of office.

Obama also alluded to the challenges he has faced in domestic policy during his first term, stressing the need for “collective action”.

“We must make the hard choices to reduce the cost of healthcare and the size of our deficit,” he said. “But we reject the belief that America must choose between caring for the generation that built this country and investing in the generation that will build its future.”

He also spoke of the need to tackle climate change, asserting that the US “must lead” the transition towards sustainable energy sources.

“I think the president is betting that American society is undergoing a pretty rapid transformation, especially regarding gun control,” she said. “Also the electoral victory he had with the Hispanic community shows there is a moment here to achieve immigration reform.”

The crowd measured less than half the record 1.8 million who assembled four years ago, when the president was sworn in for his first term.

Those at the ceremony, however, said they still supported Obama wholeheartedly.

“Being the president of the United States of America is one of the hardest jobs in the world, and he’s faced a lot of adversity, and he came in with a big problem [in the form of the financial crisis], and that problem is going to take more than eight years to overcome,” Tauris Patterson told Al Jazeera.

Several lines in Obama’s inaugural speech brought enthusiastic cheers, especially “a decade of war is now ending,” and his calls for equal pay for women and equal rights for gays.

Some also said he projected a tone of seriousness, even world-weariness, that was not there in January 2009, before the Democratic president had spent years battling high unemployment and Republicans resisting his agenda in the US Congress.

After the traditional post-inaugural lunch in the Capitol Rotunda, Obama and the first lady climbed aboard the president’s armoured limousine at the head of a parade stretching along Pennsylvania Avenue to the White House.

They got out of the car twice to walk part of the way on foot, with secret service agents keeping a close watch.

Two official inaugural balls where held in the evening, with performers including Stevie Wonder, Alicia Keys and Brad Paisley, 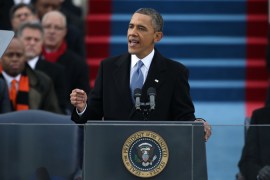 In speech delivered after oath for second term, US president touches on healthcare, the economy, divisive politics. 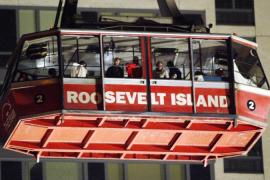 Comparisons between the Democratic administrations of Barack Obama and Franklin Delano Roosevelt are inevitable. 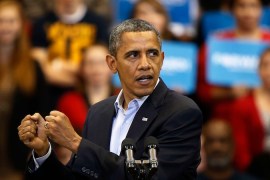 First African-American president of the US swept to power in 2008 promising “change”, and won a second term in 2012.