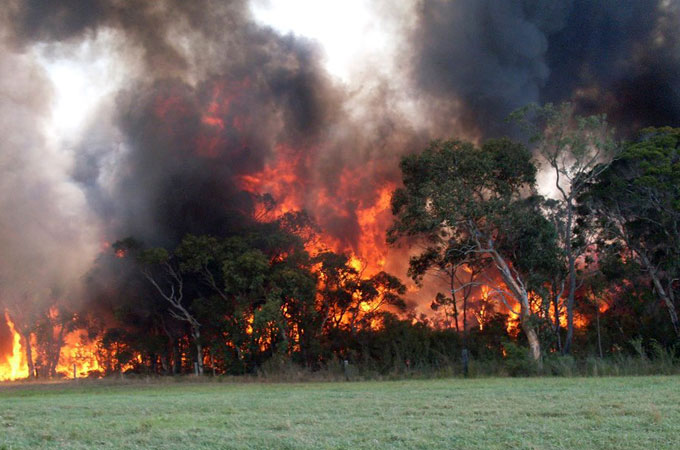 A bushfire rages at Cessnock, 120km north of Sydney. [Reuters]

Globally, 2012 was among the 10 warmest years since official records began in 1880, and 2013 has begun with several impressive temperature records in the southern hemisphere.

According to the Australian Bureau of Meteorology, Sydney reached 45.8C at Observatory Hill on Friday and 46.4C at the Airport. These temperatures beat the previous record set back in 1939.

This is the second day this month that temperatures in the city have exceeded 40C, something that has only happened four times in the previous 100 years.

Late on Friday a maximum temperature of 41.6C was confirmed in Canberra, making it the hottest day in the city since 1968.

Canberra, Adelaide and Melbourne have also reached at least 40C on two occasions so far in 2012.

The 40C maximum in Melbourne on Thursday caused problems for the tennis players at the Australian Open.  Ice vests and towels were used to keep the players cool and 10 minutes breaks between sets in the ladies’ matches were introduced later in the day.

The source of the heat, which is also affecting much of the interior of the country, is the Pilbara in northern Western Australia. This desert region has seen lower than average cloud cover and above average nearby sea temperatures in recent weeks.

Relief from the heat is expected over the weekend with maximum temperatures in Sydney falling to a more comfortable 23 to 24C.

This will be welcome news to firefighters battling wildfires raging across Victoria and New South Wales.

South Africa has also seen record-breaking heat. On Wednesday, Vioolsdrif in the northwest of the country recorded a temperature 48.4C. This is the third time the mercury has risen above the 48C mark here.  It happened back in 1995 and in 1993.

Upington, Brandvlei and Vredendal in the west of the country have all exceeded 40 degrees in the last 24 hours.

Temperatures are expected to return to more average January values over the next two days.