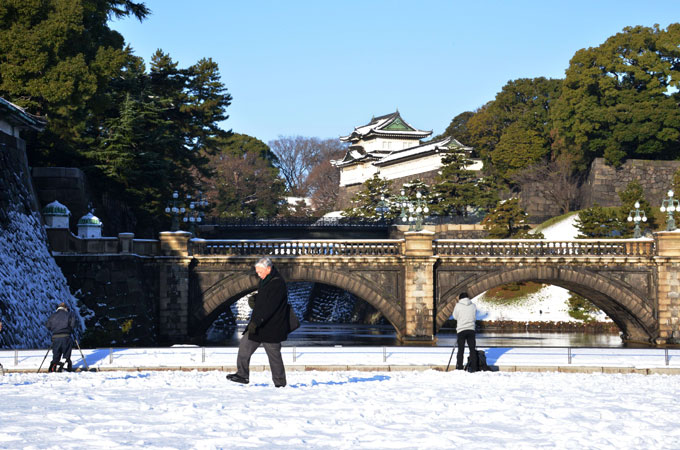 A snow covered field at the park in front of the Imperial Palace a day after heavy snowfall hit Tokyo’s metropolitan area. [AFP]

Tokyo’s first significant snow of the winter has caused widespread disruption across the Japanese capital on Monday. The bad weather left one man dead and around 900 injured.

Heavy snow blanketed much of eastern Japan over what was a holiday weekend. Tokyo recorded eight centimetres of snow in just nine hours, making it the heaviest snowfall in the region since January 2006 according to the Japanese Meteorological Agency.

Neighbouring Yokohama had 13 cm of snow over a 24 hour period. Meanwhile, over the higher ground, some places saw up to 30 cm in the mountains.

Public transport was shut down for a time. However, international operations were not severely affected by the snow. By contrast almost 900 domestic flights were delayed or cancelled. Around 3,400 people spent the night at Tokyo’s Narita airport on Monday.

There were also major problems on the roads and railways. Traffic snarled to a halt in many areas as the snow piled up before the gritters could get to work on the slippery surfaces.

There a small possibility of more snow over the next 24 hours, but Tokyo should be largely sheltered by the mountains. Milder air should then get the thaw underway on Thursday and temperatures could be back into double figures by the end of the weekend.