Residents of Beijing have been refusing to step outdoors due to fears sparked by the dangerous levels of pollutants in the air.

The air quality in Beijing on Saturday and Sunday was the “worst on record”, according to an environmentalist group as the pollution levels in the city were at 30-45 times the safety level.

The densely populated Chinese capital, has been wrapped in thick smog since Friday, reducing visibility and disrupting traffic but the air quality reportedly improved on Sunday.

“This is really the worst on record not only from the official data but also from the monitoring data from the US embassy,” Zhou Rong, climate and energy campaigner at Greenpeace said about the hazardous pollution in the city.

“Some areas in (neighbouring) Hebei province are even worse than Beijing.”

The Beijing Municipal Environmental Monitoring Centre said that the conditions were likely to last another two days as the heavy pollution is trapped in an area of low pressure.

The centre issued an alert on Saturday advising the elderly, children, and those suffering respiratory or cardiovascular illness to avoid going out or doing strenuous exercise.

On Sunday, the monitoring centre released data showing particulate matter measuring less than 2.5 micrometres in diameter (PM 2.5), had reached more than 600 micrograms per square metre at some monitoring stations in Beijing and was as high as 900 on Saturday.

According to the World Health Organisation, the recommended daily level for PM 2.5 is 20, and the high levels in Beijing has been identified as a major cause of asthma and respiratory diseases.

Air quality in Beijing showed airborne particles with a diameter small enough to deeply penetrate the lungs at a reading of 456 micrograms per cubic metre, the warning centre said.

The quality is considered good when the figure stands at less than 100, but a reading shown on the website of the US embassy in the city was above 800.

Beijing only measures up to a maximum value of 500, with the US embassy tweeting that their own readings were “beyond index”.

Yu Jianhua, head of the atmospheric environment management office of the Beijing Environmental Protection Bureau, said that current weather conditions in the capital are preventing the pollution from dispersing, as the temperature and humidity have kept mounting in the city recently.

The cities of Tianjin, east of Beijing and Wuhan City in the south have also reported severe pollution since Thursday. 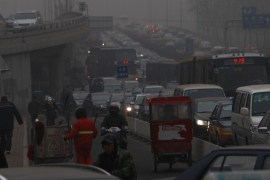 In Pictures: Pollution in Beijing

Dense smog has shrouded China’s capital, with pollution at hazardous levels for a second day. 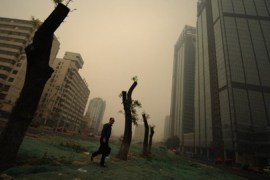 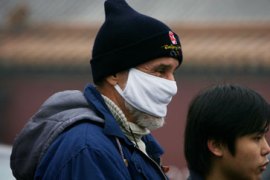