President Francois Hollande has said France is intervening to stop al-Qaeda-linked fighters in Mali who have been moving toward the capital, Bamako.

The announcement by the leader of France, the former colonial overseer in West Africa, came on Friday after Mali’s interim president Dioncounda Traore appealed for French help in stopping the rebels’ advance.

“I have agreed to Mali’s demand, which means French forces provided support to Mali this afternoon,” Hollande said. “The operation will last as long as is necessary.”

Earlier on Friday, a Mali government official told the AFP news agency that Mali’s army was being backed by Western military personnel in a fresh counter-offensive against the fighters.

“European military, including French, are present in Mali to repel any southward advance by the Islamists,” the official told AFP on Friday.

“We will not reveal their number, nor where they are based, nor what equipment they have.

“They are here. We thank these countries who have understood that we are dealing with terrorists.”

Efforts to retake the central town of Kona were launched from Sevare, a town about 70km to the south, where the Malian army has a command base.

Kona was seized by Islamist armed groups on Thursday and about 1,200 fighters have moved to within 20km of Mopti, a strategically important town on the frontier between rebel-held and government-held territories.

Mopti hosts a key Malian military airstrip, which would be vital for any missions into the north of the country.

Until now, France – like other EU countries – had limited its plans for assistance to training and logistics support for Mali’s troubled army, and had deferred to Mali and its African neighbours to resolve the crisis.

“They really needed to be propped up by another force,” said Al Jazeera’s Rory Challands, reporting from Paris. “It doesn’t seem like Mali’s government has much time.”

As troops from Nigeria and Senegal were already deployed, Ivory Coast President Alassane Ouattara – the chairman of West African bloc ECOWAS – on Friday authorised the immediate sending of soldiers.

“The chairman, after consultations with his peers and conforming to Security Council resolution 2085, is deciding to authorise the immediate sending of troops on the ground under the [African-led International Support Mission in Mali] to help the Malian army defend its territorial integrity,” Ouattara said.

The EU will also speed up preparations to send a team to Mali to help train the country’s army to fight Islamist rebels, EU foreign policy chief Catherine Ashton said on Friday.

France has hundreds of troops across western Africa, with bases or sites in places such as Senegal, Ivory Coast, Chad and Gabon.

The rebels “have even tried to deal a fatal blow to the very existence of Mali”, Hollande said in an earlier speech on Friday to the French diplomatic corps.

“France, like its African partners and the entire international community, cannot accept that.”

France will act under authority of three recent UN Security Council resolutions that call on member states to help Mali resolve its crisis in the face of a terrorist threat, both through political and military means, French diplomats have said.

Speaking to the AP news agency after the president’s speech, a top French diplomat said his country has completed its deployment of two surveillance drones to the region – to help boost reconnaissance of the rebels’ movements and activities.

The official said France is now able to deploy military assets “very quickly” and insisted that Hollande’s speech was “not just words … When you say that you are ready to intervene, you have to be.”

In an updated travel advisory, the French foreign ministry said on Friday all non-essential French citizens should leave. International aid organisations have begun evacuating staff from the narrow central belt of the country.

For months, Hollande had explicitly said France would not send ground forces into Mali, but the president’s speech suggested that French air power would be used – marking a shift from recent public statements from Defence Minister Jean-Yves Le Drian that it would not be. 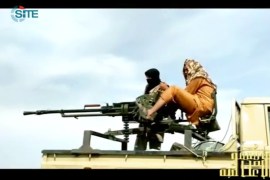 Call comes as interim leader Dioncounda Traore appeals for help and as rebels extend their control in country’s north.

Mali’s president pleas for support in countering an offensive by groups who control the north and are heading south.