Shells fired by M23 rebels killed at least three people in the Democratic Republic of Congo’s eastern city of Goma, the United Nations said, after a more robustly mandated UN force was drawn into the fighting for the first time.

Two more civilians died on Saturday during demonstrations that broke out in the wake of the shelling, the UN said.

Fighting between M23 and Congolese soldiers, after the rebels entered a security zone around Goma on Wednesday, has now killed at least seven civilians. On Thursday, a UN brigade formed to neutralise armed groups in the DRC fired artillery at the rebels and joining the Congolese army on the front lines.

It is the first time the brigade, made up of troops from Tanzania, South Africa and Malawi, has fought alongside the army.

The DRC’s information minister immediately blamed Saturday’s rocket attack on neighboring Rwanda, which has long been accused of supporting the M23.

Rwanda twice invaded its much larger neighbour in the 1990s and sponsored Congolese rebels trying to topple the Kinshasa government. Millions have died since then in DRC’s eastern borderlands, a patchwork of rebel and militia fiefdoms rich in tin as well as tungsten and coltan ores.

M23 – named after a peace agreement they signed with the DRC government in March 2009 to be integrated into the national army before they mutinied in April 2012 – has been accused by France of war crimes.

France condemned the surge in fighting and “in particular attacks perpetrated by the M23 against civilians and MONUSCO which constitute war crimes”, Vincent Floreani, foreign ministry spokesman, said.

He urged UN troops to use “all disposable means” to defend the local people.

Prosper Basse, the UN military spokesman, told UN-sponsored Radio Okapi that troops from MONUSCO were “henceforth engaged alongside the FARDC [Congolese army]” to deal with the threat.

MONUSCO had already declared a protection zone with a perimeter of 30km around Goma and the nearby strategic town of Sake three months ago “to prevent this sort of atrocity by M23 against civilian populations”, Basse said.

The DRC government also accused Rwanda of firing rockets on Goma on Thursday to help the M23.

“The DR Congo government is awaiting an explanation from its neighbour over these serious events,” Lambert Mende, a government spokesman, said.

Rwanda responded on Friday to the accusation, warning the DRC that it would not stand by “indefinitely”.

“The RDF [Rwanda Defence Force] remains prepared to take all necessary measures to ensure the safety of the population,” Joseph Nzabamwita, Rwanda’s army spokesman, said in a statement.

“Acts of provocation that endanger the lives of Rwandan citizens will not remain unanswered indefinitely,” he added, but stressed that Kigali “remains committed and active in the search of a sustainable solution”.

M23, meanwhile, issued a statement blaming the regular army and an ethnic Hutu rebel movement based in the region, the Democratic Forces for the Liberation of Rwanda (FDLR). 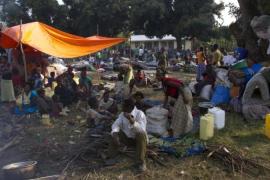 United Nations has given rebels 48 hours to leave the eastern city of Goma or face “use of force”. 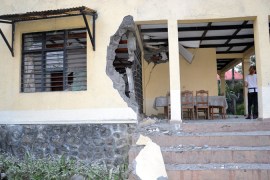 Peacekeeping troops ordered to protect civilians in eastern city of Goma after fighting between army and M23 rebels.