Former Egyptian President Hosni Mubarak has been transferred from prison to house arrest at a military hospital.

The longtime autocrat, forced to quit in 2011, was flown by medical helicopter from Cairo’s Tora prison on Thursday. He will remain under house arrest as he stands trial on corruption and murder charges.

Footage on local television showed him transported from the helicopter to a hospital in the Maadi suburb in a heavily-guarded ambulance.

Mubarak spent several weeks in the same hospital during his two-year detention, after lawyers cited poor conditions in prison. Authorities renovated a ward in Tora where Mubarak was later held.

A small crowd of supporters gathered outside the prison and cheered as the helicopter took off.

Meanwhile, the April 6 youth movement called for protests on Friday against his release.

But his release was met with indifference from many Egyptians, who are more focused on the country’s recent political crisis and last week’s massacre of supporters of deposed President Mohamed Morsi.

“His release was widely covered, but after two years, at this time, many Egyptians see Hosni Mubarak as an irrelevance,” Al Jazeera’s Bernard Smith, reporting from Cairo, said.

Mubarak’s next court hearing is scheduled for Sunday. He still faces a retrial on charges of killing protesters during the 2011 revolution, and three corruption cases as well.

But he has already spent more than two years in pre-trial detention, the maximum allowed under Egyptian law, and so the courts ruled him eligible for release pending trial.

Hazem el-Beblawi, the prime minister, said on Wednesday night that Mubarak would be placed under house arrest following his release.

Mubarak chose to be held at the military hospital, the official MENA news agency reported.

At least one of the corruption cases against Mubarak could be close to a settlement.

Wednesday’s ruling ordering his release concerns the so-called “Ahram gifts” case, in which Mubarak allegedly accepted $11m worth of gifts, including jewelry and watches, from the state-run newspaper Al-Ahram.

He has allegedly already repaid the amount of the gifts, and the other defendants in the case have been released, suggesting that the charges against Mubarak could eventually be dropped.

He also faces charges of embezzling money from a fund earmarked for presidential palace renovations. A judge working on this case ordered him released on Monday, on the same procedural grounds. A separate charge accuses him of “illicit gains” during his presidency.

Mubarak was convicted last year of involvement in the murder of protesters during the 2011 uprising, and sentenced to life in prison, but was granted a retrial in January.

Egypt’s Muslim Brotherhood and other anti-coup groups, meanwhile, have called for mass demonstrations against the military-backed interim government on Friday, as arrests of Brotherhoood leaders continued on Thursday.

Authorities have now detained Ahmed Aref, a spokesman for the group, and Hassan al-Brins, a member of parliament representing the Freedom and Justice Party (FJP), the political wing of the Muslim Brotherhood.

Supporters of the anti-coup alliance have dubbed the protest a “Friday of martyrs”, with 28 mosques in the Cairo area named as points of departure for the demonstrations.

In recent days, Brotherhood protests that once attracted tens of thousands of people at locations across the country have ebbed, suggesting the group’s famed organisational strength may have been damaged by the arrest of its leaders. They have also been subject to a violent crackdown on the part of authorities, with at least 900 people reported killed in the last eight days, as security forces have moved to end anti-coup demonstration.

“We will remain steadfast on the road to defeating the military coup,” a pro-Morsi alliance called the National
Coalition to Support Legitimacy and Reject the Coup said in a statement. 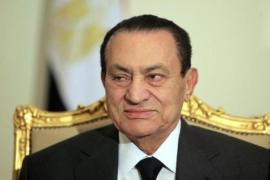 Cairo residents rue and rejoice over court decision which could free Egypt’s longtime ruler from prison. 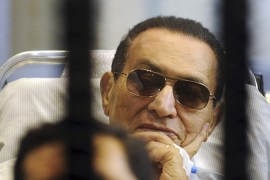 Former president remains in custody pending possible appeal, but could be released as early as Thursday.