European Union ministers have agreed to put the military wing of Lebanese group Hezbollah on the EU terror list, in a major reversal of policy.

“It is good that the EU has decided to call Hezbollah what it is: a terrorist organisation,” he said.

“For years the Netherlands has pushed for listing Hezbollah… that’s why I’m satisfied that we took this important step today.”

“We will follow up on the issue through diplomatic channels, while we wish the EU countries had carried out a careful reading of the facts and sought out more information,” Mikati said.

“Lebanese society, in all its components, is keen to abide by international law and to maintain excellent relations with EU member states,” he said in a statement on Monday.

Until now, the EU had resisted pressure from Washington and Israel to blacklist Hezbollah, arguing that it could fuel instability in Lebanon, where the group is part of the government, and add to tensions in the Middle East.

Britain had sought to persuade its EU peers since May to blacklist the group, citing evidence that it was behind a deadly bus bombing in Bulgaria last year.

The blacklisting would mean imposing visa bans on individuals and asset freezes on organisations associated with the group.

But the implementation would be complicated since officials would have to unravel the links between the different wings within Hezbollah’s organisational network and see who could be targeted for belonging to the military wing.

Britain, backed by France and the Netherlands among others, has argued that Hezbollah’s growing involvement in the Syrian war means Lebanon is already in a fragile situation and that the EU must weigh the possibility of future attacks in Europe.

A draft of the meeting conclusions noted that making use of “restrictive measures to combat terrorism does not prevent the continuation of dialogue with all political parties in Lebanon.”

“Legitimate financial transfers” and aid will also not be affected, it added, according to the AFP news agency.

On Thursday, Lebanon asked Brussels not to blacklist Hezbollah on the grounds the group was an “essential component of Lebanese society.”

Some EU diplomats, responding to concerns that sanctions could further radicalise the group, have argued that targeting the military wing could, in the long term, persuade some of its members to move away from violence into the political sphere.

Hezbollah denies any involvement in last July’s attack in the Bulgarian coastal resort of Bourgas that killed five Israelis and their driver.

But the Bulgarian interior minister said last week that Sofia had no doubt the group was behind it.

In support of its bid to impose sanctions, Britain has also cited a four-year jail sentence handed down by a Cypriot court in March to a Hezbollah member accused of plotting to attack Israeli interests on the island. 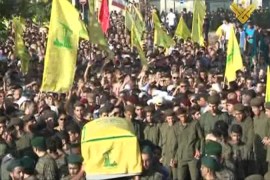