Trayvon Martin’s parents have been joined by celebrities, civil rights activists and other protesters as they led rallies in New York and Florida to show their anger at the acquittal of the neighbourhood watch volunteer who shot and killed their unarmed teenage son.

Sybrina Fulton led a protest of more than 1,000 people in New York, along with veteran civil rights activist Reverend Al Sharpton, where she told the crowd that the picture painted of her son, Trayvon, during the trial depicted a man she did not recognise.

“He was a child,” she said during her speech to the hundreds-strong crowd.

“We have moved on from the verdict. Of course we’re hurting of course we’re shocked and disappointed, but that just means we have to roll up our sleeves and continue to fight.”

Singers Jay Z and Beyonce also came out to the New York rally.

In Miami, a crowd of hundreds singing the protest song “We Shall Overcome” joined Trayvon’s father, Tracy Martin, to demand that George Zimmerman, acquitted of second-degree murder and manslaughter exactly a week ago, face civil charges.

Al Jazeera’s Cath Turner, reporting from New York, said that the Martins and other organisers had continually called for the protests to remain peaceful.

“There is still a lot of emotion one week after the sentence was handed down. The purpose of these rallies is to pressure the Department of Justice in to bringing civil charges against George Zimmerman,” our correspondent said.

Zimmerman has always maintained he shot Trayvon in self defence.

If a white male teen was involved in the same kind of scenario ... both the outcome and the aftermath might have been different.

Critics contend Zimmerman, who is white and Hispanic, wrongly suspected Martin, 17, of being a criminal because he was black.

Zimmerman called police to report Martin, then left his car with a loaded handgun concealed in his waistband.

A fight ensued in which Zimmerman suffered a bloody nose and head injuries before he shot Martin once in the heart.

Marches, under the banner of “Justice for Trayvon”, also took place at federal courthouses in Chicago, Los Angeles, San Francisco, Atlanta and dozens of other cities.

Violence at protests earlier this week led to arrests in Los Angeles and the San Francisco Bay area.

Speaking at the White House on Friday, President Barack Obama cautioned against violence, as he urged all Americans to try to understand the Martin case from the perspective of African-Americans.

“There is a history of racial disparities in the application of our criminal laws,” he said.

“A lot of African American boys are painted with a broad brush … If a white male teen was involved in the same kind of scenario … both the outcome and the aftermath might have been different.”

Beverly Bond from the mentoring group Black Girls Rock told Al Jazeera that the black community wanted people to know that this was not an isolated incident.

“This is an injustice we have seen in our community over and over and over again. It is amazing to me that people don’t know why we’re upset,” she said.

“The trial added insult to injury because it was like he was being put on trial for his own murder.” 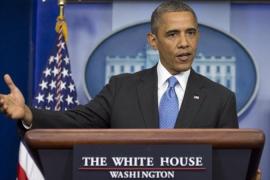 US president offers first public reaction to Zimmerman verdict, who was acquitted on charges related to Martin’s death. 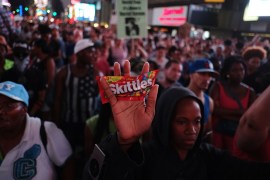 Thousands protest in Manhattan against George Zimmerman’s not guilty verdict in the killing of Trayvon Martin.