Tens of thousands have gathered in Bosnia for the funeral of 409 newly identified victims of the 1995 Srebrenica genocide on the 18th anniversary of the atrocity in which about 8,000 Muslims were slaughtered.

Among the victims were 43 teenage boys and a baby that was born during the ordeal. They were laid to rest on Thursday at a special cemetery near Srebrenica where victims are buried as their remains are gradually found in mass graves.

As delegations arrived to lay a wreath at the Srebrenica memorial, families of the victims were paying their last respects at the coffins displayed in the cemetery of Potocari, outside Srebrenica.

“This year we are going to bury the youngest victim of the genocide, the Muhic family’s baby,” Kenan Karavdic, the official in charge of the burial ceremony, said.

The baby girl died shortly after birth in July 1995 at the UN base in Potocari. She was buried next to the grave of her father Hajrudin, also a victim of the genocide.

Srebrenica was a former UN “safe haven” that fell to Bosnian-Serb forces under wartime commander Ratko Mladic. The victims were rounded up, executed and bulldozed into pits over five days in July 1995.

This year’s commemorations bring the total of identified victims to 6,066. Another 2,306 remain missing a decade after Bosnia began the process of identifying victims of the genocide through DNA testing.

Their remains were found in more than 300 mass graves in the area, according to Amor Masovic, head of Bosnia’s Institute for Missing Persons. But officials say that many bodies are still unidentified.

Columns of wooden coffins, covered with green cloth, lined the hall at the memorial centre, where relatives have spent the last few days walking among them to find their loved ones.

Earlier this week, thousands of mourners stood in silence along the route of three trucks that carried the remains to Potocari. Relatives clutched pictures of the victims and pillowcases embroidered with their names. Some bowed their heads and wept as the trucks passed and several women held young children close.

About 100,000 people were killed during Bosnia’s 1992-95 war, when Mladic’s forces seized vast tracts of land and drove out non-Serbs. Fighting between Serb, Croat and Muslim forces tore the country apart.

Meanwhile, judges at the United Nations’ Yugoslav war crimes tribunal in The Netherlands have reinstated a genocide charge against Radovan Karadzic linked to a campaign of killing and mistreating non-Serbs during Bosnia’s bloody war.

The decision on Thursday reversed the former Bosnian Serb leader’s acquittal last year on one of the two genocide charges he faces. 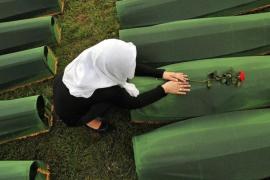 A further 409 victims of the Srebrenica massacre are buried today, 18 years after their death. 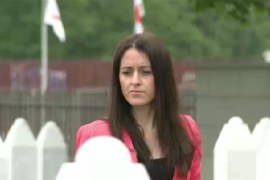 Nermina Muminovic tells Al Jazeera her story of survival since genocide in 1995, the year she last saw her father. 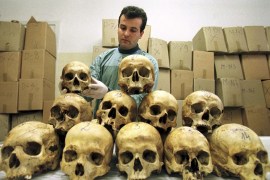