Pakistan’s umbrella Taliban movement has claimed responsibility for killing nine foreign climbers in the Himalayas, saying it had created a new wing to attack foreigners to avenge US drone strikes.

Gunmen had stormed a base camp on Saturday night in a remote part of northern Pakistan and killed nine tourists and one Pakistani guide who were part of a Nanga Parbat mountaineering expedition, police officials said.

Taliban spokesman Ehsanullah Ehsan telephoned the AFP news agency to say that the killings were intended to avenge the death of the second in command of the Tehreek-e-Taliban (TTP) in a US drone strike late last month.

“We did it and we claim responsibility for this attack,” Ehsan said in the call from an undisclosed location.

“One of our factions, Junood ul-Hifsa, did it. It is to avenge the killing of Maulvi Wali ur-Rehman,” he said.

“We want to convey to the world that this is our reply to US drone attacks,” he added.

Rehman died on May 29 in a US drone attack on a house in North Waziristan, the most notorious Taliban and al-Qaeda stronghold in Pakistan on the Afghan border.

Ehsan told AFP that Junood ul-Hifsa was a new wing set up by the Taliban “to attack foreigners and convey a message to the world against drone strikes”.

The night-time raid, which killed five Ukrainians, three Chinese and a Russian, was among the worst attacks on foreigners in Pakistan in a decade and underscored the growing reach of fighters in a highland region once considered secure.

Police said a 15-strong gang of attackers wearing uniforms used by a local paramilitary force arrived at about 1.00 am at a group of tents and ramshackle huts used by hikers scaling the flanks of the snow-covered 8,125-metre Nanga Parbat peak.

“The gunmen held the staff hostage and then started killing foreign tourists and made their escape,” an official said.

A senior government official said a large number of security personnel had been sent to the area.

Al Jazeera’s Kamal Hyder, reporting from Islamabad, said that the attack took place at a base camp, 4000 metres above sea level, for the western face of the Nanga Parbat, one of the highest mountains in the world.

He said this is the first attack against foreigners in that region and the remoteness of the area made retrieval of bodies possible only by helicopter.

Hyder said that this incident puts Pakistan in a difficult situation as the country is planning to host other mountaineering expeditions this year.

He added that since it takes two days to travel to the base camp, officials said the gunmen could still be trying to escape and have sent military helicopters for search and rescue. 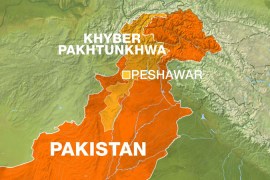 Blast at mosque in Pakistan’s Peshawar 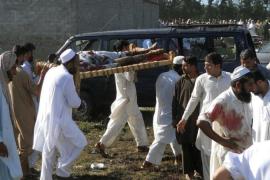 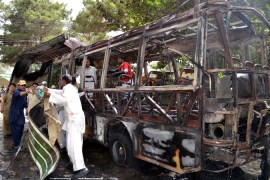