Torrential rain and floods have washed away buildings and roads, killing at least 26 people in the northern Indian state of Uttarakhand, officials have said.

Monsoon rains have lashed all of India one month ahead of schedule, officials said on Monday.

“Twenty-six people have died and more than 50 persons are missing, due to flooding, landslides and building collapses caused by heavy rain,” Piyush Rautela, director of Uttarakhand state’s disaster management centre, said on Monday.

Three members of a single family, including a boy died when their house collapsed, crushing them in the state capital Dehradun, Rautela told the AFP news agency.

The situation is very grim. The meteorological office has predicted that the rain will continue for another three days at least


“Dehradun received a record 220 millimetres of rain in a 24-hour-period yesterday. It has been raining non-stop since Saturday morning,” he said.

More than 10,000 pilgrims stranded along a mountain pass leading to a Hindu religious site were being evacuated by helicopter after roads to the pilgrimage spot were blocked by landslides.

Army and paramilitary troops were leading efforts to rescue scores of people from the rooftops of their flooded homes.

The state government was readying food parcels and drinking water pouches to be air dropped to villages cut off after roads were washed away.

The River Ganges and its tributaries are flowing above the danger mark in several areas in the Himalayan state.

“The situation is very grim. The meteorological office has predicted that the rain will continue for another three days at least,” Amit Chandola, a state government spokesman, said.

State authorities were preparing to evacuate people from the worst-hit districts to relief camps, he said.

A high alert and flood warnings have been issued across Udhampur district and in the Hindu holy city of Haridwar as rivers breached their banks.

The rains usually cover all of India by mid-July, but this year it happened on June 16, the earliest such occurrence on record, a senior official at the India Meteorological Department said.

“We expected an early coverage, but not so fast,” said the Meteorological Department official, who did not want to be named as he was not authorised to speak to the media.

The early onset of the annual monsoon has boosted hopes for the country’s farming sector and its slowing economy.

The rains that lash the subcontinent from June to September are dubbed the “economic lifeline” of India, one of the world’s leading producers of rice, sugar, wheat and cotton.

The weather department has forecast India will receive normal rains this year, raising prospects of a stronger performance by Asia’s third-largest economy.

Last year India got below-normal rain in the first half of the wet season.

The rains picked up in some areas later, but large areas of west and south India did not benefit.

The monsoon will be crucial for parts of Maharashtra state, India’s biggest sugar-producer, which has been reeling from the worst drought in more than four decades.

Agriculture contributes about 15 percent to gross domestic product but the livelihood of hundreds of millions of Indians living in rural areas depends on the farming sector. 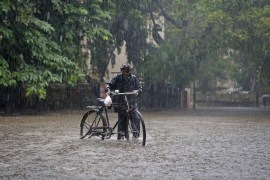 The monsoon arrives one month early

The rains have swept across India and into Pakistan four weeks ahead of schedule. 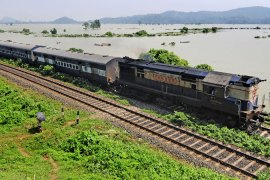 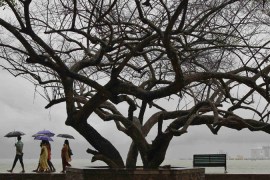 Arrival of monsoon in Kerala state comes much to the relief of farmers after droughts of 2012.