Tornadoes killed at least 14 people in the US Midwest, including two children, officials said Saturday, as flooding hampered cleanup efforts in Oklahoma, still recovering from a monster twister that struck last month.

The Oklahoma Medical Examiner’s Office announced nine fatalities in the state and said five of the victims have not been identified, while the sheriffs’ offices in towns east of Oklahoma City confirmed two other people had died.

In Missouri, authorities said three people died from severe flooding in the wake of the storms.

Streets turned into rivers, with stranded cars submerged in water as high as their door handles in some places. CNN said a massive sink hole off a major road developed due to the deluge, halting traffic.

Two of the victims have not been identified. A mother and child perished as they traveled in their car on an interstate highway, according to the Oklahoma Department of Emergency Management.

The National Weather Service’s Storm Prediction Center in Norman, Oklahoma, said the first tornado developed around the city of El Reno before moving into parts of Oklahoma City, spawning others.

Local broadcaster KOCO reported that 77 people had been admitted to hospitals with storm-related injuries.

Missouri Governor Jay Nixon, who toured the widespread devastation to assess the damage, urged residents of his state to avoid walking or driving through flooded areas.

“Missouri has been hit by several rounds of severe storms in the past few weeks, and last night’s dangerous weather follows several days of heavy rain,” he said in a statement.

“Because many streams and rivers are overflowing their banks, we will need to stay vigilant in both monitoring and responding to flooding across the state as well. This remains a dangerous situation,” he said.

As the extent of the devastation in Oklahoma became clear, the work of cleanup crews was complicated by downpours that drenched the region overnight.

Officials from hard-hit Canadian County told reporters that crews were working to assess and restore “washed out” places. 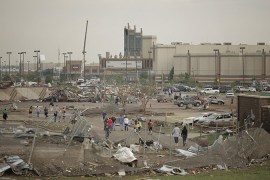 US president declares major disaster with at least 91 people feared dead and scores injured and missing. 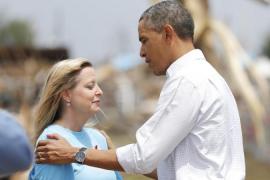 US President offers moral and monetary support in wake of tornado that killed 24 people.