Syria’s western border town of Qusayr has come under fire for a seventh straight day as government forces backed by the Lebanese Hezbollah movement battled to drive out rebel fighters, witnesses have said.

At least 40 people were reported killed on Saturday in what residents told Al Jazeera was the worst fighting they had seen since the start of the civil war.

The shelling by government troops began early on Saturday, forcing residents into crammed bomb shelters in the strategic town that links Damascus, the capital, with the Meditaranean.

“On average, about 40 shells per minute hit the town,” Tammas said.

“They also used land-to-land missiles with huge destructive capacity. The shelling lasted about six or seven hours. Hezbollah fighters and government troop then started to make advances inside the city.”

As the battle raged in Qusayr, Hezbollah chief Sheikh Hassan Nasrallah vowed “victory” in Syria, warning that the fall of the Damascus regime would plunge the Middle East into a “dark period”.

In a televised address, Nasrallah pledged that Hezbollah would turn the tide of the conflict in President Bashar al-Assad’s favour, and stay as long as necessary to do so.

“We will continue this road until the end, we will take the responsibility and we will make all the sacrifices,” he said. “We will be victorious.”

He said Hezbollah was fighting in Syria against Islamic radicals who posed a danger to Lebanon, and pledged that his group would not allow Syrian rebels to control areas along the Lebanese border.

The Hezbollah leader’s comments offered the clearest public confirmation yet that the Iranian-backed group was directly involved in Syria’s war.

Hezbollah initially tried to play down its involvement, but could no longer do so after dozens of its fighters were killed in the town and buried in large funerals in Lebanon.

Meanwhile, Syria’s fractured political opposition failed on Saturday after three days of intense deliberations to reach a decision on whether to attend an international conference brokered by the US and Russia aimed at ending the conflict in Syria.

The US and Russia want to bring together representatives of the opposition and the Syrian government at an international conference in Geneva for talks on a possible transition government.

Much remains up in the air, including the date, the agenda and the list of participants.

The Syrian National Coalition meetings started on Thursday and were scheduled to end on Saturday, but discord among the fractured opposition delayed the discussions.

Al Jazeera’s Hashem Ahelbarra, reporting from Istanbul, said: “They have delayed the crucial vote on the expansion of the Syrian coalition.”

By Saturday night, the factions locked themselves up in a room, trying to find a way to work together.

The talks were now expected to continue on Sunday, opposition figures said. 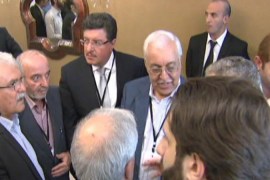 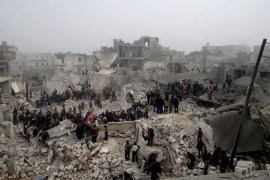 Dissidents meeting in Spain say they oppose negotiation with Syrian president unless it is aimed at his departure. 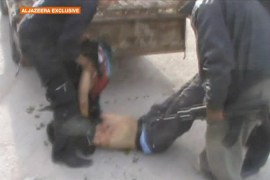