Activists demanding the closure of the Guantanamo Bay prison have marked the 100th day of a hunger strike there by submitting a petition to the White House containing some 370,000 signatures.

A group of activists wearing orange jumpsuits and black hoods like those used on detainees at Guantanamo Bay gathered outside the White House on Friday to call for the immediate closure of the controversial jail.

Richard Killmer, executive director of the National Religious Campaign Against Torture, said that “years of detention without charge or trial have created a sense of desperation and hopelessness among the men at Guantanamo, which has led over 100 of them to join a hunger strike”.

Colonel Morris Davis, a former military prosecutor at Guantanamo, handed over the petition to the White House.

Activists also brandished an effigy of President Barack Obama, referencing his past vow to close the US military prison.

Out of 166 inmates, 102 are on hunger strike at Guantanamo, with 30 being fed through tubes. One inmate continued to be hospitalised but prison officials said his life was not in danger.

Inmates are restrained and a feeding tube is pushed through their nose and into their stomach – a practise the UN compares to torture. 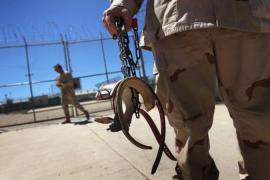 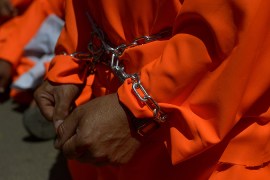 Prison’s status remains a conundrum both for the detainees’ sense of justice and for legal and moral authority of US. 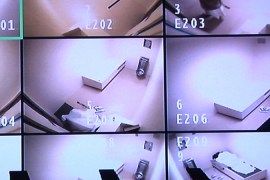