A top museum and research institution in the US has released a new study revealing direct evidence of cannibalism at the oldest permanent English colony in the Americas.

The Smithsonian Institution reported on Wednesday that settlers at the US state of Virginia’s Jamestown colony resorted to cannibalism to survive the harsh winter of 1609, dismembering and consuming a 14-year-old English girl.

According to the Washington-based government organisation, it is the first direct proof of cannibalism at the oldest permanent English settlement in the Americas.

Writings had suggested it, but no hard physical evidence existed until now.

A recent excavation at the historic site revealed not just the remains of dogs, cats and horses eaten by settlers during the cold “Starving Time” of that year, but also the bones of a girl known to researchers simply as “Jane.”

Jane probably was part of a relatively prosperous household, possibly a gentleman’s daughter or maidservant, said Smithsonian forensic anthropologist Douglas Owsley, who analysed her bones after they were found by Preservation Virginia, a private nonprofit group.

Her back molars had not yet erupted, putting her age around 14 years, and there was a lot of nitrogen in her bones, indicating she ate a meat-rich English diet, Owsley said.

It is not known whether Jane was killed or died of natural causes. The Smithsonian said there was no evidence of murder.

After her death, in a year when many Jamestown colonists starved, Jane’s body was hacked apart by a butcher or butchers who barely knew what they were doing.

According to the Smithsonian, the subject may have been chosen because others in her household were already dead and there was no one to bury her.

“There was very clear post-mortem dismemberment that involved chops to the forehead, chops to the back of the head that cracked the skull open,” the scientist said.

“A puncture to the left side of the head was used to essentially lever and open the … head to remove the brain. There are cuts all over the face and on the mandible, inside as well as out.”

By 1609, Owsley said, the settlement was effectively operating under siege, with many of the male colonists killed by hostile Native Americans after venturing out.

Those who remained inside Jamestown’s confines were often women, children and the sick. Those who dismembered Jane might well have been women, he said.

The cuts were “very tentative, hesitant,” Owsley said. “This is not someone who’s skilled in terms of kitchen work or butchery, and yet they know, out of sheer need, that this is what they have to do”.

The brain, tongue, cheeks and leg muscles appear to have been eaten, with the brain probably consumed first because it decomposes soon after death, the Smithsonian said in an online announcement.

Scholars have speculated that extreme drought, hostile relations with the Native Americans, and a lost supply ship made the Jamestown colonists desperate enough to eat humans.

William Kelso, lead archeologist on the project, and his team discovered the girl’s remains last summer.

“We found a deposit of refuse that contained butchered horse and dog bones,” Kelso said. “That was only done in times of extreme hunger. As we excavated, we found human teeth and then a partial human skull.” 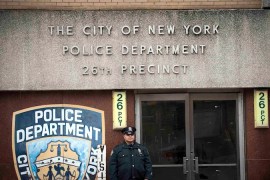 US policeman charged in cannibalism plot

Prosecutors say NYPD officer planned to kidnap, torture and eat at least 100 women whose data he took from police files.