The search for survivors from Bangladesh’s worst industrial accident stretched into a third day on Friday, with the death toll rising to 290 after the collapse of a building housing garment factories.

Forty-one people trapped inside the rubble of the eight-storey building were rescued alive late on Thursday, government minister Jahangir Kabir Nanak said, about 40 hours after the disaster on the outskirts of Dhaka.

Rescuers from Bangladesh’s army, navy and air force, as well as police and fire services, pored over huge piles of rubble and twisted metal in the search for survivors at Rana Plaza building in the commercial suburb of Savar, at the outskirts of Dhaka.

Around 2,000 people have been rescued over the past two days, at least half of them injured, but as many as 1,000 people remain unaccounted for.

After visiting the disaster site, Muhiuddin Khan Alamgir, the interior minister, told reporters the building had violated construction codes and that “the culprits would be punished”.

Workers said they had hesitated to go into the building on Wednesday morning because it had developed such large cracks a day earlier that it even drew the attention of local news channels.

While a bank in the building closed on Wednesday because of the warnings, the five clothing companies told their workers there was no danger. Rana is now on the run, according to police.

“We asked the garment owners to keep it closed,” said Bangladesh Garment Manufacturers and Exporters Association (BGMEA) President Mohammad Atiqul Islam. Instead, Islam said, there were 3,122 workers in the factories on Wednesday.

Survivors described a deafening bang and tremors before the eight-storey building, where most of the employees were women, crashed all around them.

Al Jazeera’s special correspondent, whom we are not naming due to reporting restrictions, said thousands of protesters took to the streets of Dhaka on Thursday in reaction to the disaster.

Some of them carried sticks and chanting slogans such as “we want execution of the garment factory owners”.

The BGMEA office was attacked, our correspondent said.

Workers also blocked a road and indulged in vandalism at some places, the Daily Star newspaper reported.

Altogether, they produced several million shirts, pants and other garments a year.

The New Wave companies, according to their website, make clothing for major brands including North American retailers The Children’s Place and Dress Barn, Britain’s Primark, Spain’s Mango and Italy’s Benetton.

Ether Tex said Wal-Mart, the world’s biggest retailer, was one of its customers.

Primark acknowledged it was using a factory in Rana Plaza, but many other retailers distanced themselves from the disaster, saying they were not involved with the factories at the time of the collapse or had not recently ordered garments from them. 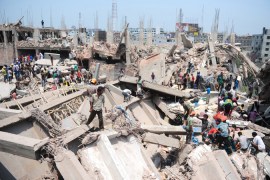 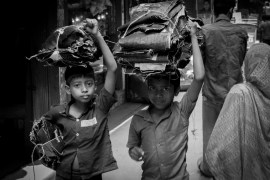 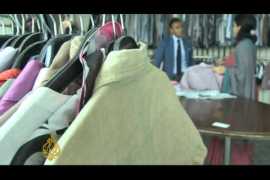