Henrique Capriles, Venezuela’s opposition leader, has called off a march by his supporters in the capital, Caracas, saying his rivals were plotting to “infiltrate” the rally to trigger violence.

The announcement came on Tuesday after demonstrations turned violent a day earlier. Seven people were killed in the violence after the electoral council ruled out Capriles’ demands to recount votes.

“The illegitimate one and his government ordered that there be violence to avoid a vote count! They are the ones responsible,” he said.

Capriles had planned a peaceful march to the offices of the electoral authority to present the opposition’s demands for a full vote recount.

The country remained on edge as Nicolas Maduro, the president-elect, accused the opposition of orchestrating a coup and banned protests against results of Sunday’s election.

Capriles who has repeatedly demanded a recount, responded on his Twitter account, blaming Maduro and his government for the violence.

In a separate development, the country’s chief prosecutor announced an investigation into the post-election violence.

“The situation seems to be getting more tense by the minute,” she said.

National Guard troops fired tear gas and plastic bullets on Monday to disperse students protesting against the official results as Maduro – the successor of late President Hugo Chavez – was formally declared the winner.

The students hurled chunks of concrete and stones back at the troops on a highway in Caracas.

The demonstrators tried to reach the western part of the Venezuelan capital, where most of the government is headquartered.

Capriles had unsuccessfully called on the National Electoral Council to suspend plans to officially proclaim Maduro as the winner of the election.

Following his confirmation, Maduro urged his supporters to demonstrate across the nation on the same days that the opposition planned further protests.

“I continue calling for peace, and I call the people to combat in peace,” Maduro said on state-run television, calling for “mobilisations across the country” on Tuesday and Wednesday.

‘Power of the majority’

The National Electoral Council said late on Sunday that Maduro had won 50.66 percent of the vote compared to 49.07 percent for Capriles – a difference of less than 300,000 ballots – allowing him to carry forward the policies of the late Hugo Chavez.

Maduro, however, said he would welcome an audit. “We are calling for respect of the results,” he said.

Hugo Chavez named Maduro, a former bus driver and union activist who rose to foreign minister and vice president, as his political successor in December before undergoing a final round of cancer surgery. 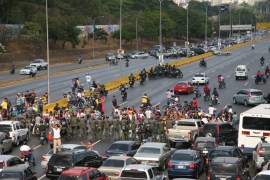 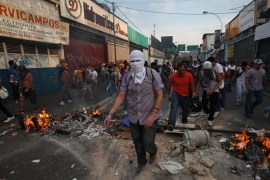 Nicolas Maduro has been confirmed as acting president, but the opposition has taken to the streets, demanding a recount. 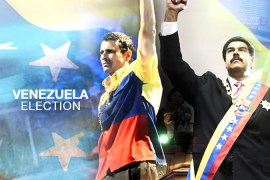