US Secretary of State John Kerry has met Palestinian President Mahmoud Abbas as part of a fresh US bid to restart negotiations between Israel and Palestine.

Kerry is on a 10-day tour, which will also take him to Asia, and met Abbas in Ramallah on Sunday after holding talks earlier in the day with Turkish foreign minister Ahmet Davutoglu in Istanbul.

While in Israel and the occupied Palestinian territories, Kerry will also meet with Israeli Prime Minister Binyamin Netanyahu and other senior Israeli and Palestinian leaders.

Abbas told visiting Kerry that the release of prisoners held by Israel was a “top priority” for resuming failed peace talks.

“President Abbas stressed that the release of the prisoners is a priority that creates an appropriate climate for the possibility of moving the peace process forward,” his spokesman Nabil Abu Rudeina said.

Abbas told Kerry that releasing the 4,500 or so prisoners held in Israeli jails, a deeply sensitive issue on the Palestinian street, was a “top priority for creating the right atmosphere for the resumption of negotiations”.

Al Jazeera’s Nicole Johnstone in Ramallah reported that the priority for the US was for “both sides to return to talks without any preconditions”.

Most Palestinians reject the idea of recognising Israel as a “Jewish-only” state because many still demand the right of return for refugees who decades ago were forced from their homes in what is now Israel.

During earlier talks with Davutoglu in Istanbul, Kerry urged Turkey and Israel to fully normalise relations, after Israel’s US-brokered apology for a deadly 2010 raid on a Gaza aid flotilla organised by a Turkish charity.

“We would like to see this relationship that is important to stability in Middle East, critical to the peace process itself, we would like to see it back on track in its full,” Kerry said in a joint news conference with Davutoglu.

He said, however, that it was not for the United States “to be setting conditions or terms” for the reconciliation.

Israel apologised to Ankara on March 22 for the deaths of nine Turkish activists in a botched raid by Israeli commandos on a Gaza-bound aid ship, in a breakthrough engineered by US President Barack Obama during a visit to Jerusalem.

The apology ended a nearly three-year rift between Israel and Turkey – two key US allies in the region – and the two countries are due to begin talks on compensation on Friday.

But they have yet to exchange ambassadors and fully restore diplomatic ties.

“It is imperative that the compensation component be fulfilled, that the ambassadors be returned,” Kerry said. “I’m confident there will be goodwill on both sides.”

Turkish Prime Minister Recep Tayyip Erdogan accepted the Israeli apology “in the name of the Turkish people” but said the country’s future relationship with Israel including the return of ambassadors would depend on Israel.

Al Jazeera’s Bernard Smith, reporting from Istanbul, said that Davutoglu had already spoken to Khaled Meshaal, the leader of the Palestinian group Hamas, which controls Gaza, and Mahmoud Abbas.

“We don’t know what they discussed, but its an indication that Turkey is taking some sort of interest in the Middle East peace process,” said Smith.

He added that Kerry “wants Turkey to normalise its relationship with Israel because it sees Israel, Turkey and Jordan as three oases of stability in a very turbulent region.”

The US top diplomat also commended Turkey’s efforts to provide for the tens of thousands of refugees who have entered the country during Syria’s two-year conflict.

He called Turkey “incredibly generous” for keeping its border open and doing “everything possible” to respond to the increasing humanitarian crisis in the neighbouring country.

“The US and Turkey will continue cooperating to reach the shared goal of a peaceful transition in Syria,” he said, repeating the US position that President Bashar al-Assad must leave power.

“Thousands of Syrians have lost their lives,” Davutoglu said. “The international community needs to act on this. The failure to do so would be interpreted by Assad as a weakness.

“The US position is important and so is Turkey’s.” 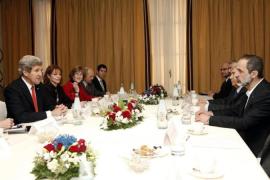 Talks between US secretary of state and Turkish leaders held as heavy fighting is reported near Syria’s Aleppo city. 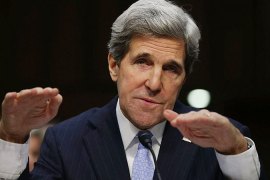 US secretary of state nominee tells confirmation hearing he would push for revival of Israeli-Palestinian peace talks. 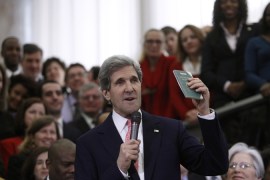