Several hundred striking Hong Kong dockworkers are refusing to back down in a weeklong pay dispute that is slowing cargo shipments at the world’s third busiest port.

Entering its seventh day on Wednesday, the dockworkers and supporters camped out on the road in front of a container terminal.

The workers are demanding a 20 percent pay raise to make up for pay cuts in past years, but subcontractors supplying labour to port operators are only offering 5 percent.

The workers want Hutchison to negotiate directly with their union about pay, and better health and safety conditions.

Crane operator Cho Wai-kei, who joined the strike, said he and his colleagues earn about US$90 a shift, or about $2,200 a month.

He and other workers operating the giant cranes moving containers on and off ships complained of arduous 12-hour shifts during which they weren’t allowed to leave their operator cabins high above the ground, even to use the bathroom.

“When you get into that metal cage, there’s no difference between you and a dog,” Cho said.

Officials say the action is costing Hutchinson $644,000 a day.

“There are some disruptions, particularly for the importers,” which are seeing some shipments of perishable goods like fruit rot because they’re sitting on the dock longer, said Willy Lin, chairman of the Hong Kong Shippers’ Council.

“On the export side it’s slower to get the containers out of the terminals.”

The company has distanced itself from the dispute, saying that the stevedores are not Hutchison employees.

It said terminal operations are continuing but truck traffic in the area where the strikers are camped has slowed down.

The Shippers’ Council, which represents importers, exporters and manufacturers, has advised its members to arrange backup plans in case the strike drags on, including having shipments move through other ports in China, such as nearby Shenzhen.

Hong Kong is a major transfer point for goods coming in and out of mainland China.

It was the world’s busiest port for years, handling shipments of jeans, shoes and electronics manufactured in southern China’s Pearl River Delta for export to consumers in the West. But it has been overtaken by Shanghai and Shenzhen in recent years. 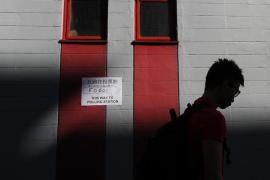 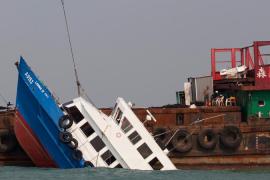 The death of 38 passengers has shocked the city as it rarely sees major calamities. 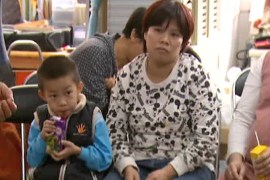 New arrivals from the mainland struggle with poverty in this city of contrasts.