French senators have begun examining a controversial bill to legalise same-sex marriage and adoption, prompting protests by opponents keen to see the reform thrown out.

The bill, which would give same-sex couples the same rights as heterosexual couples to marry and adopt children, is expected to pass the Senate after being adopted by the lower house of parliament in February.

Both chambers are dominated by the ruling Socialist Party and its allies.

However, the Socialist government has been taken aback by the size and vehemence of protests to the bill, which Catholic, Muslim and Jewish religious leaders all opposed.

The bill has come under fierce attack in a country that is officially secular but predominantly Catholic, mobilising hundreds of thousands of people pro- and anti-gay marriage protesters nationwide.

“We have the honour of submitting the bill, which was comfortably adopted by the National Assembly (the lower chamber) and aims to open up marriage and adoption to same-sex couples,” Christiane Taubira, French justice minister, said.

Debate on the bill is likely to last until April 12 or 13 in the Senate, after which senators will vote to approve or reject it.

The vote is expected to be a tight one as the ruling Socialists enjoy a smaller majority in the Senate than in the National Assembly.

Broadly speaking, the Socialists support the proposed reform, as do the Greens, Communists and some centrists.

About 280 amendments have been introduced for debate, and the conservative opposition UMP party may put forward a motion asking for the bill to be put to a referendum.

Early on Thursday, opponents registered their protest by turning up at the home of centre-right, pro-bill Senator Chantal Jouanno, blowing whistles and shouting slogans, to try and persuade her to vote against the bill.

Two other anti-gay marriage groups are planning protests later in the day in front of the Senate – one with whistles, drums, tin cans and saucepans, the other involving Catholics praying.

On Thursday, research by pollsters CSA showed that 53 percent of the French were “favourable” to same-sex marriage, but that 56 percent opposed adoption by a homosexual couple.

The movement against gay marriage has been more vociferous than the one backing same-sex unions.

A campaign orchestrated by the Catholic Church and belatedly backed by the mainstream centre-right opposition has steadily gathered momentum.

In January, hundreds of thousands of demonstrators flooded into Paris for an anti-gay marriage march.

Last month, police were forced to fire tear gas on people protesting the bill, and dozens were arrested.

French President Francois Hollande championed same-sex marriage and adoption during his election campaign last year, and his support for the legislation has not wavered throughout the turmoil.

His girlfriend, Valerie Trierweiler, has revealed that Hollande will be attending the marriages of gay friends once the legislation is on the statute books. 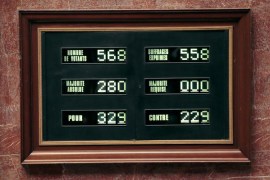 The 320-299 vote follows months of debate and controversy that provoked mass rallies across France both for and against. 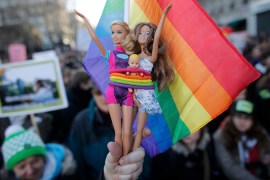 Paris demonstration is in response to a march two weeks ago by opponents of the new law. 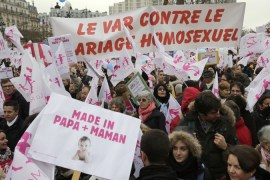 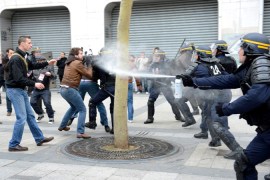 Police fight back crowds as about 300,000 rally in French capital ahead of Senate vote on “marriage for everyone” bill.