A post-mortem examination on the body of exiled Russian tycoon Boris Berezovsky has found the cause of death to be “consistent with hanging”, British police have said.

Thames Valley Police said in a written statement a post-mortem was carried out on Monday on the 67-year-old Kremlin critic, who was found dead at his home in Berkshire, south-east England, on Saturday.

“The results of the post-mortem examination, carried out by a Home Office pathologist, have found the cause of death is consistent with hanging,” the statement said.

“The pathologist has found nothing to indicate a violent struggle.”

Police said other tests, including a toxicology examination, were being carried out, but results would not be received for several weeks.

A forensic examination by Scenes of Crime Officers of the property in south London would continue for several days, the statement said.

Police said earlier there was no indication that anyone else was involved in the death.

A pathologist from the interior ministry did the examination instead of a local expert because of the sensitivity of the case, the force said.

The former billionaire power broker was once known as the grey cardinal of Kremlin politics.

He helped Russian President Vladimir Putin come to power but fled for Britain in 2000, where he became one of the Russian government’s fiercest critics.

Brezovsky’s body was found in his property in Ascot, an affluent town a few kilometres from Queen Elizabeth’s Windsor Castle on Saturday.

Some of his associates had hinted earlier Berezovsky might have killed himself because he was severely depressed after losing a $6bn court case last year to Roman Abramovich, the Russian billionaire owner of Chelsea Football Club.

Others said he would never have taken his own life.

Always surrounded by controversy and conspiracy theories, he survived several assassination attempts, including a bombing that decapitated his driver.

In exile, he often said he feared for his life, particularly after his friend and former Russian spy Alexander Litvinenko
died from radioactive polonium poisoning in 2006.

In Russia, Kremlin allies and pro-government media pressed ahead with portrayals of Berezovsky as a beaten man who had begged Putin’s forgiveness in a desperate effort to return to his homeland. Berezovsky’s friends in London have denied this.

Nationalist legislator Vladimir Zhirinovsky said he had met Berezovsky by chance in the Israeli resort of Eilat in January,and that Berezovsky had said he would do “anything Moscow and the Kremlin told him” to return to Russia.

“The only condition was a decree pardoning him,” Zhirinovsky told the daily Izvestia in an interview published on Monday, referring to the crimes Berezovsky had been convicted of in Russia.

He was one of a handful of well-connected business people who became instant billionaires under former president Boris Yeltsin when the state arranged for them to buy giant oil companies for what quickly proved to be a fraction of their value. 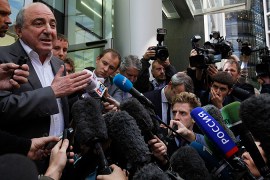 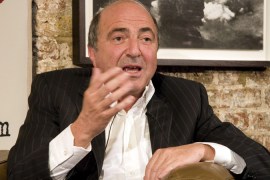