The US Army soldier accused of providing diplomatic cables and other secret documents to the whistle-blower WikiLeaks website, has pleaded guilty to misusing classified material, but denied the most serious charge in the case – aiding the enemy.

Private First Class Bradley Manning, 25, entered the pleas on Thursday prior to his court martial, which is set to begin on June 3, in a case that centres on the biggest leak of government secrets in US history.

“I believe that if the general public … had access to the information … this could spark a domestic debate as to the role
of the military and foreign policy in general,” Manning, dressed in full military uniform, testified calmly.

The US soldier pleaded not guilty to the most serious charge, aiding the enemy, through his attorney.

Manning, who has been jailed at Quantico Marine Base in Virginia for more than 1,000 days, could face life imprisonment if convicted of that charge.

He pleaded guilty to a series of 10 lesser charges that he misused classified information at the hearing before military judge Colonel Denise Lind.

He faces a maximum of 20 years in prison for those charges.

He also admitted to misuse of documents from the US Southern Command pertaining to Guantanamo Bay, a memo from an unnamed intelligence agency, and records from a military operation in Farah province in Afghanistan.

Al Jazeera’s Rosiland Jordan said from Washington DC that, in the end, “it doesn’t really matter”.

“Aiding the enemy is one of those charges that will, if he’s convicted, land him in prison without ever being able to leave under his own power,” she said.

“It’s worth noting that perhaps one of the most serious charges he could have faced – treason – he was not charged with that.”

Manning, an army intelligence officer, was arrested in May 2010 while serving in Iraq and charged with downloading thousands of intelligence documents, diplomatic cables and combat videos and forwarding them to WikiLeaks.

WikiLeaks began exposing the US government secrets in the same year, stunning diplomats around the world and outraging US officials who said damage to national security from the leaks endangered US lives.

Manning had offered to plead guilty to various lesser charges in violation of the Uniform Code of Military Justice, including the unauthorised possession and wilful distribution of information accessed in the Combined Information Data Networks, a military database, for Iraq and Afghanistan.

He is prepared to take the witness stand to read aloud from a 35-page statement defending himself in the espionage case, but only after Lind rules on how much of it he will be allowed to read.

Under a ruling last month by Lind, Manning would have any sentence reduced by 112 days to compensate for the markedly harsh treatment he received during his confinement.

While at Quantico, Manning was placed in solitary confinement for up to 23 hours a day with guards checking on him every few minutes.

Julian Assange, the WikiLeaks founder, has taken refuge in the Ecuadorean embassy in London since June to avoid extradition to Sweden for alleged sex crimes.

US Army Private First Class tells a judge he was mistreated at Marine Corps Base Quantico. 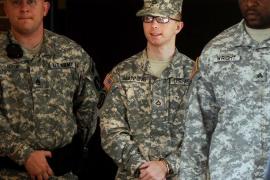