Less than a week after the Democratic Republic of Congo and neighbouring African nations signed a peace accord to hold off hostilties, a fresh wave of violence has erupted in the central African nation.

Fighting erupted on Thursday between the Congolese troops and the rebel group Alliance of Patriots for a Free and Sovereign Congo (APCLS) in Kitchanga, about 90km from Goma, Al Jazeera’s Nazanine Moshiri reported.

It is not known if the latest fighting has resulted into casualties, but at least 3,000 civilians have sought refuge near a UN base in Kitchanga, according to Moshiri.

On Sunday, DR Congo signed an agreement with 10 other African nations including Rwanda and Uganda, which were accused in a UN report last year of aiding M23 rebels, who swept through eastern Congo and captured the key city of Goma in November. Both countries have denied the allegations.

Under Sunday’s agreement, Congo’s neighbours agreed not to tolerate or support armed groups.

The Congolese government pledged to prevent armed groups from destabilising neighboring countries, and agreed to fast-track security sector reform, particularly within its army and police, and to consolidate state authority in the east.

A looming leadership struggle also threatens to split the more prominent rebel group, M23, which some fear could lead to more waves of violence there.

An “internal fight” is going on between M23 rebels loyal to Bosco Ntaganda and his rival leader Sultani Makenga, according to Moshiri.

Ntaganda, who is in hiding, is a former Congolese general wanted for war crimes by the International Criminal Court at The Hague and publicly had very little to do with the group.

Makenga, on the other hand “is far more cautious type of leader” who wants to wait for a peace agreement currently being discussed in Kampala in Uganda.

“We are hearing credible reports that Ntaganda is trying to persuade M23 to take Goma again, and we understand he has the loyalty of several top commanders as well as some rebel troops,” Moshiri said.

A UN source also told Al Jazeera that he would not be surprised if a “shootout” erupts in the coming days.

“Things have got that bad,” Moshiri said.

Fighting in the area of Rutchuru on Sunday and Monday, among M23 factions, left at least eight people dead, she said.

Mineral-rich eastern Congo has been engulfed in fighting since the 1994 Rwanda genocide.

The UN has more than 17,700 peacekeepers in Congo, assisted by more than 1,400 international police.

But they were unable to protect civilians from the M23 rebels whose movement began in April 2012 when hundreds of troops defected from the Congolese armed forces.

With inputs from Nazanine Moshiri 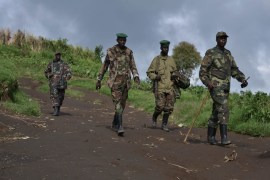 Rebels pulled out of Karuba in eastern DR Congo on Wednesday. 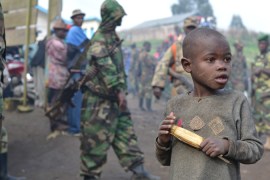 Reporter’s Notebook: The rise of M23

Congolese rebels may have withdrawn from Goma, but there is a very real threat that fighting could soon return to DRC.